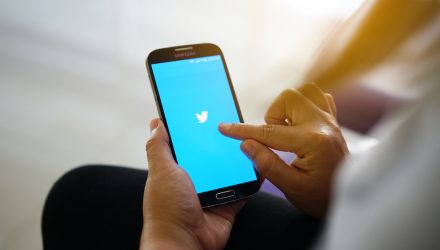 While stocks are targeting a third day in a row of gains, amid optimism over the economy reopening and positive continuing claims data, one stock in suffering today, as the company finds itself embroiled in a political battle.

Twitter is down 2.5% on Thursday amid allegations from the White House that the social media communications service is tampering with free speech.

President Trump is planning to sign an executive order on Thursday about social media, according to tweets by several White House reporters on Wednesday. The anticipated decision arrives after Twitter fact-checked Trump tweets on mail-in ballots for containing “potentially misleading misinformation.”

The apparent draft version of the order, which could still be adjusted, would delegate the Commerce Department to contact the Federal Communications Commission to schedule a rulemaking proceeding to reevaluate the law’s purview. It would also place the FTC in charge of  investigating complaints of political bias to ascertain whether tech companies’ content moderation policies clash with their oaths to be unbiased.

On Thursday morning, Trump tweeted that this will be “a Big Day for Social Media and FAIRNESS!”

This will be a Big Day for Social Media and FAIRNESS!

Twitter CEO Jack Dorsey said he supports the company’s decision to confirm the validity of the two tweets by President Donald Trump, despite the tremendous backlash that has ensued.

“This does not make us an ‘arbiter of truth,’” Dorsey wrote. “Our intention is to connect the dots of conflicting statements and show the information in dispute so people can judge for themselves. More transparency from us is critical so folks can clearly see the why behind our actions.”

Twitter rival Facebook, who is also garnering attention as a result of the executive order has a contrary approach according to CEO Mark Zuckerberg.

“We have a different policy than, I think, Twitter on this,” Facebook co-founder Zuckerberg told Fox News in a clip posted online on Wednesday. “I just believe strongly that Facebook shouldn’t be the arbiter of truth of everything that people say online.”

Ahead of the White House’s announcement about the executive order, Sen. Josh Hawley, R-Mo., said he would introduce new legislation “to end these special government giveaways,” and end prior protection efforts he has supported.

“If @Twitter wants to editorialize & comment on users’ posts, it should be divested of its special status under federal law (Section 230) & forced to play by same rules as all other publishers,” Hawley wrote in a tweet.

The Vanguard Telecommunication Services ETF (VOX) is up 0.48% on the day, amid the news, the Technology Select Sector SPDR Fund (XLK) has rallied 1.57%, while the Fidelity MSCI Communication Services Index ETF (FMAT) advanced 1.53%. The Global X Social Media ETF (SOCL), which has a large allocation of TWTR is also 0.57% higher Thursday.