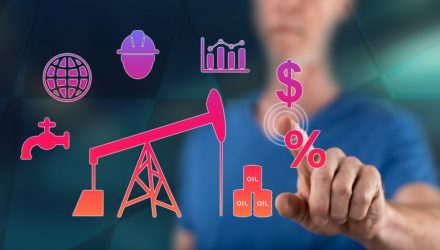 Energy ETFs Are “Down, But Not Out”

Goldman Sachs Group analysts trimmed their bullish outlook on crude oil to $110 per barrel, compared to its previously optimistic outlook of $140 per barrel, despite the recent negative shocks.

Oil is “down, but not out,” Goldman analysts, including Damien Courvalin, said. “We continue to expect that the oil market will remain in unsustainable deficits at current prices.”

Specifically, Goldman Sachs analysts argued that the crude oil market will remain in a deficit unless the markets suffer a drastic “demand destruction on top of the ongoing economic slowdown,” according to a recent note.

“The unprecedented discount of Brent prices, even wider than we expected, can be explained by the worsening Russian energy crisis, as it boosts the costs of transforming crude out of the ground (Brent) into retail pump prices around the world through surging EU gas prices, freight rates, USD, and global refining utilization,” according to Goldman Sachs.

Looking ahead, the bank projected that prices could continue to pick up toward the end of the year, with Brent crude trading up to $125 per barrel in the fourth quarter, with U.S. retail gasoline and diesel averaging $4.35 and $5.50 per gallon, respectively.

“We forecast that US retail fuel prices will rally into year-end then decline from 2Q23 onward as refining and marketing margins start to normalize,” Goldman added.