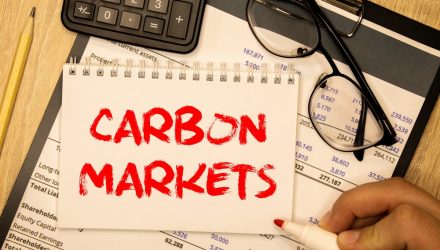 The global carbon allowance market has experienced some fluctuations in the first half of 2022 due to the macro environment and individual market pressures, but opportunity persists, particularly within the diversification potential that global carbon allowance investing provides for portfolios. Luke Oliver, managing director, head of climate investments, and head of strategy at KraneShares, discussed the current state of carbon markets and the second half outlook in a recent paper.

KRBN touted a return of 108% in 2021 and was the second-best performing U.S.-listed ETF in the markets for the year, explained Oliver. This year the fund faced challenges largely due to the global macro environment.

“The first half of the year has been incredibly interesting for all markets, not least carbon markets, due to the ongoing invasion of Ukraine that has materially disrupted the energy supply in Europe. With the specters of the market recession, inflation, and geopolitical risk comes a unique window of opportunity,” Oliver wrote.

The ongoing humanitarian tragedy of Russia’s war with Ukraine has created a whole host of energy problems for Europe — you can read more here as to the direct impact that it has on the EU market. The broader picture is that while less natural gas equates to more coal burning in the short-term, a positive pressure for carbon allowances, an extreme shortage of natural gas supply to Europe could be disastrous in the form of EU recession, and result in the pullback of industries that are heavy emitters (metal producers and fertilizers for example).

“Both could soften the demand for allowances,” Oliver explained. On the reverse side, “the increasing realities of climate change, including global heatwaves, may lead to a push for tighter regulation and increased action, which should be highly constructive for carbon allowances.”

“Global macro views will always find occasion to cross asset classes, and margin calls in one asset can draw on the liquidity of other assets. However, each of the four major carbon markets has differentiated drivers that will continue to keep them decorrelated,” Oliver explained. 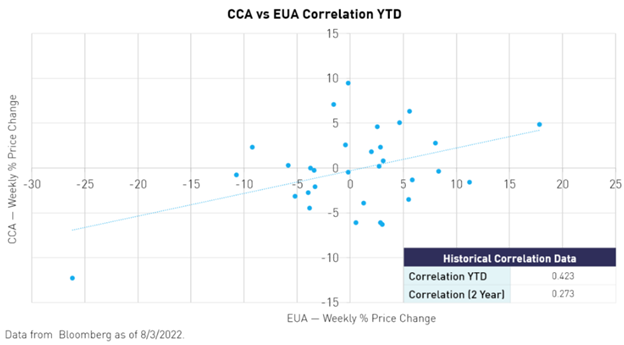 Some of those drivers include different emissions targets for individual carbon allowance markets, different supply and demand ratios, different economies with different political regimes, different fuel types and ratios used within each carbon market, and more. These are the kinds of factors that remain unique to each market and “none of them are fungible with each other” according to Oliver.

“As the effects of climate change continue to become apparent and both economic and political forces align around climate action, we believe global carbon markets will continue to make new highs,” Oliver explained. This is accomplished through tightening carbon markets as supply and demand become increasingly unbalanced and carbon allowance prices are forced higher.

“Higher prices lead to fuel switches and greener processes and, most of all, lead to innovation in reducing industrial emissions,” Oliver wrote. “This is the power of capital markets in creating the right action.”