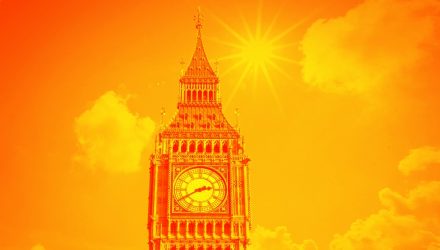 The global energy arena continued to change over the summer as the EU continues working to rapidly transition away from Russian energy dependence and parts of Europe and the U.K. experienced unprecedented heat waves that briefly brought many aspects of life to a stand-still. Luke Oliver, managing director, head of climate investments, and head of strategy at KraneShares, discussed the current state of global carbon markets and the second half outlook in a recent paper, breaking down what these changes mean for the U.K. allowances market.

Oliver explained that the United Kingdom Emission Trading System is in a more stable position than its European Union counterpart because it is more insulated from the politics in the European energy theater. During the most volatile period for the allowances market, the UKAs dropped down 9% at their lowest, and finished the first half of the year up 10% — UKAs currently are around 4.5% year-to-date as of 07/28/22.

“Remember these markets are volatile, but uncorrelated with other asset classes and each other. U.K. allowance (UKA) market was the most robust and proved itself in its post-Brexit form,” Oliver wrote.

The United Kingdom now finds itself in a unique position regarding the European energy crisis: the U.K. is currently supplying electricity to mainland Europe via the Channel Tunnel that runs from England to France. This in turn means that the U.K. will be burning more coal and gas as it sends this needed electricity onward and sells it for profit, driving up local emissions which should, in turn, create greater demand for carbon allowances in the U.K. as well as having the means to pay from profits made.

See also: What Europe’s Energy Crisis Means for Carbon Markets in the Second Half

Second Half Outlook for UKAs

On top of increased emissions from electricity generation for Europe, the U.K. just endured a significant heat wave that brought many cities to a standstill, particularly because most homes and businesses aren’t outfitted with air conditioning and heat mitigating measures.

“This climate change induced problem should lead to more power-sucking technology being adopted in the U.K., which risks driving up emissions and allowance demand in the longer term. This development will be devastating for climate change unless we develop more efficient and renewable alternatives,” explained Oliver. “How do you create the economic environment for investment with these innovations? Robust carbon prices.”

Together these create a potential bullish outlook for UKAs, though the total number of allowances in circulation (TNAC) could grow and absorb the added demand, something not uncommon in newer allowance markets.

“There is a strong thesis with investors that lower-priced programs, such as CCA at $28 or RGGI at $13, have more upside than higher-price schemes like the U.K. at $95 and EUA at $80,” Oliver discussed. “While I would agree the quantum of upside is higher in the low-priced schemes, the larger programs can still potentially put up modest to strong returns while we wait for the big moves in emerging schemes.”

The KraneShares Global Carbon ETF (NYSE: KRBN) recently celebrated its second anniversary from its inception on July 30. For a fund that is about two years old, KRBN was the first of its kind to offer an investment take on carbon credits trading and is in a position to capture the rise in carbon allowance prices as emissions limits become more stringent globally and countries tackle the carbon crisis.

KRBN carries an expense ratio of 0.78% and has over $1 billion in net assets.