You are at:Home»ETF Strategist Channel»Challenges Ahead for Fed Chair Jerome Powell 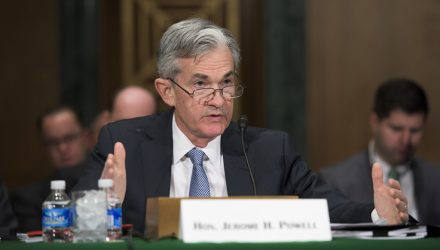 President Donald Trump unveiled his nominee to head the Federal Reserve Bank on Nov. 2, 2017. His choice was Jerome Powell, who has served as a member of the Federal Reserve’s board since 2012 (nominated by President Obama). Powell assumed office on Feb. 5, 2018.

At 64, he became the first former investment banker at the helm of the Fed. A lawyer by training, he will also be the first chairperson who is not an economist in more than 40 years. His deep knowledge of financial markets is one of the great strengths he will bring to the job. We expect the Senate to approve his nomination, despite rumors that many Republican senators favored a more radical change at the top of the Fed (namely, the nomination of Professor John Taylor).

His voting record shows that he has sided with the current chair, Janet Yellen, to raise interests very slowly and to start reducing the Fed’s approximately $4.5 trillion balance sheet. It is thus widely believed that he will continue with the pragmatic approach that characterized his two predecessors, Ms. Yellen and Ben Bernanke.

However, analysts are already speculating that he may not stay the course when it comes to regulations of the financial industry, especially those put in place after the 2008 crisis. Although he does support most of the Dodd-Frank reforms, he opposes the Volcker Rule, which forbids banks from making certain speculative investments (e.g., proprietary trading, investing in hedge funds). His opposition is based on the burden it allegedly imposes on small banks. Regardless of his stance on regulations and even interest-rate policy, we believe that his main challenge will be the reduction of the Fed’s balance sheet. Interestingly, this is something his European and English counterparts will also be doing at the same time.
In the remainder of this commentary, we set out to review the main problems he could face during his four-year tenure, which would start in February of 2018.

The Fed is responsible for monetary policy. Its main targets are price levels (that is, keeping inflation low) and maximizing employment. If one looks at inflation and the rate of unemployment, it seems like the Fed is navigating through relatively calm waters. The Fed would probably like inflation to pick up a little bit, but that’s it. Moreover, low inflation is not only the result of monetary policy, but also a product of demographic factors and low energy prices, among others.

Nevertheless, the next few years will be very challenging for the monetary authority. The reason stems directly from the policies the Fed has followed since 2008 to keep the economy afloat in the aftermath of the Great Recession. The so-called quantitative easing (QE) program led the Fed to buy, from 2008 until 2014, more than $3.5 trillion in government and mortgage-backed debt. The European Central Bank and The Bank of England implemented similar programs. This aggressive intervention helped, according to its supporters, to increase liquidity in markets, accelerate economic recovery and boost confidence.

But now the time has come not only to stop the QE programs, something the Fed already did (2014), but also to dismantle them. This means not only that the central banks will stop buying new bonds, but that they will not roll over the ones that expire. Hence the bloated balance sheets of these central banks will have to slowly ebb back to something closer to its historical levels. The Fed started this process in October, albeit at a very slow pace, as we already described in a previous paper. The ECB has only committed to halving its purchases next January, saying they will continue at least until September (a date for rolling back the program is nowhere in sight). It is estimated that the Fed and the ECB will have to let go of more than $4 trillion in assets during the next few years. To put that number in context, Germany – Europe’s largest economy – has a GDP of $3.5 trillion. How this is done in the US will now depend mostly, of course, on Mr. Powell.