You are at:Home»Featured»Can This ETF Hedge Against Rising Inflation? 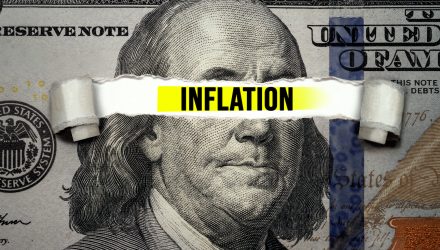 Can This ETF Hedge Against Rising Inflation?

Both stocks and bonds are tumbling on Wednesday amid spiking consumer inflation data for April that has frightened investors, heightening concerns that the Fed could be mistaken about the U.S experiencing only an ephemeral climb in the prices of goods.

If the Fed is incorrect about inflation, it might need to reverse its easy monetary policies sooner than expected and raise interest rates, a scenario that sends investors scurrying.

Inflation ramped up the quickest since 2008 last month, with the Consumer Price Index, or CPI, surging 4.2% from a year ago, compared to the Dow Jones projection of a 3.6% increase. The monthly gain was 0.8%, versus the anticipated 0.2%. The CPI measures a basket of goods and energy and housing costs.

Stocks and index ETFs have already been showing strong reactions to the 8:30 a.m. ET inflationary report. The S&P 500 fell below key technical levels as well as Tuesday’s low, as selling pressure intensified Wednesday. Meanwhile, the Nasdaq is down over 2.36%, as tech stocks are often hit hard when interest rates climb.

“The tug-of-war has been intensified,” said Quincy Krosby, chief market strategist at Prudential Financial. Stocks have already been under pressure on worries that inflation is picking up and will squeeze margins and erode corporate profits.

The VIX also surged again, climbing 11% to about $24. The CBOE Volatility Index, aka the “fear index,” signals broadening market volatility when it moves higher. It is calculated based on the put and call options on the S&P 500.

“How transitory is transitory?” Krosby said. “All this does is provide more uncertainty in a market that is still expensive. Even with the pullbacks, it’s still expensive … We’ll have to see how the market factors it in. Does it see it as part of the reopening?”

The Fed has been prognosticating a short period of high inflation. But even Fed Vice Chairman Richard Clarida said Wednesday morning that he was surprised by the hot CPI data. Clarida did restate that the inflationary pop should be short-lived.

Some analysts agree with the Fed, seeing just a transitory jump in prices.

“It has pandemic written all over it,” said Mark Zandi, chief economist at Moody’s Analytics. Zandi said that while the CPI was surprising, he still expects the burst in inflation to be relatively short-lived. “Businesses are just normalizing their pricing which they cut during the pandemic. Having said that, underlying inflation is very sturdy. It’s firm.”

Other financial experts see more sustained inflation, which could prompt action on the part of investors and traders, who seek a hedge for climbing prices.

“The question is does all of this level off at a higher inflationary level? That’s the question for the market” added Krosby. “There’s only so much that the Fed can do to squelch concerns … Even if you’re in the camp that says we’re going to have higher inflation when the economy normalizes.”