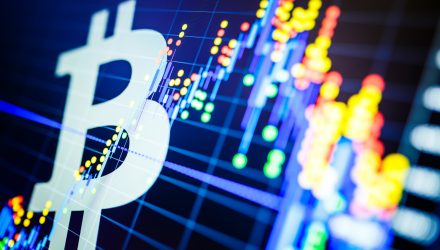 Bitcoin is the largest digital currency and data suggest that dominance is increasing. That even as the volatile cryptocurrency is in a bear market that has it laboring around $7,500, well off the December highs of around $20,000.

“During Thursday’s trade, the largest crypto made up 45.66% of the total market, its largest slice of the cryptocurrency pie since the beginning of the year. Meanwhile, the total market cap for digital currencies stood at $274 billion, down more than $500 billion from its all-time high,” reports Business Insider.

Recently, the Bitcoin Dominance Index has been rising, confirming the dominant perch of the cryptocurrency.

“What this metric does is determine Bitcoin’s market share compared to all other currencies combined. In the early days, the Bitcoin Dominance Index was close to 70% or more,” reports BTC.com. “This figure has begun sliding over the years and even dips below 35% on a regular basis. Especially late last year, the BDI was not looking great for the world’s leading cryptocurrency.”

After bitcoin, the largest cryptocurrencies are Ethereum, Ripple, Bitcoin Cash and Litecoin. Perhaps not surprisingly, it looks bitcoin will remain the dominant digital currency, at least according to the BDI.

“The cryptocurrency marketplace, which is known for its spine-tingling volatility, saw bitcoin grab market share as it ran up to $20,000 at the end of 2017. As its price fell at the beginning of 2018, and smaller coins saw relative gains, its share bottomed out below 33% in January,” according to Business Insider.