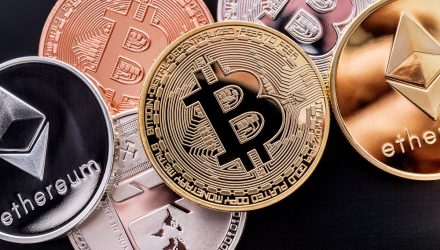 Bitcoin, Cryptocurrencies Tumble Over Past Week

Bitcoin, the globe’s first and largest cryptocurrency tumbled more than 20% over the past week, dragging down other cryptos as well, to hit a low of $7,757 Friday, its lowest level since June. The new Bitcoin futures were also on pace for their worst performance of the year.

While Bitcoin has been extremely volatile since its inception, the cryptocurrency had been in relatively stable trading range since late June, trading between roughly $9,500 to $12,000 until this week, when it broke down. The sharp drop below $8,000 began last Monday and continued to sell off throughout the trading week. Other major cryptocurrencies ether and XRP are also down 24% and 19% for the week, respectively.

While analysts had trouble determining the cause of the drop, one theory investors cited to was a lackluster debut of a new Bitcoin futures product. Last Sunday, the Intercontinental Exchange, parent company of the New York Stock Exchange, launched its futures contracts on a platform called Bakkt as a way to attract additional bitcoin investors who may have previously been leery about trading on exchanges.

Michael Moro, CEO of Genesis Trading, said there was a “sell the news” effect after the Bakkt launch,  especially after what was “perceived as a low-volume launch,” he said.

“Anticipation for Bakkt was really high in Asia, and fairly or unfairly, the launch was counted on as a positive price catalyst,” Moro said.

Moro claimed that anemic demand for a new product is normal. But disenchanted bitcoin investors sold and set off a cascade of liquidation, possibly setting into motion a break below the range that was simply going to happen anyway.

Jeff Dorman, chief investment officer at Los Angeles-based digital asset manager Arca, also seemed at a loss to determine why Bitcoin dropped stating that he “can’t remember a time when a crypto price move has made less sense.”

“While no one has perfect clarity ahead of big moves, and fast and violent price moves are often unpredictable, it has historically been possible at least to rationalize large moves after the fact,” he said. “But three days after this decline started, there still haven’t been any valid explanations.”

Facebook’s planned crypto Libra gave Bitcoin a boost earlier this summer, as did investors who were safe haven hunting amid economic uncertainty.

“The continuation of the selling pressure may be based on confusion, as the market tries to regain equilibrium even though neither buyers or sellers really understand why we’re here in the first place,” Dorman said.