You are at:Home»Alternative ETFs»Bill Clinton to Give Keynote Address at Ripple Conference 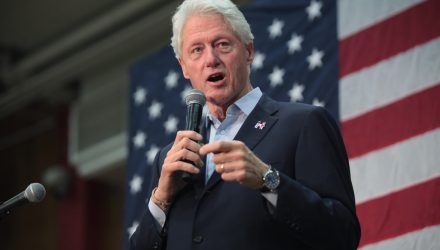 Bill Clinton to Give Keynote Address at Ripple Conference

Former U.S. President Bill Clinton is set to headline Ripple’s Swell conference, which will run from Oct. 1-2 in San Francisco. The 42nd President of the United States will give a keynote address as well as participate in a question-and-answer forum.

Clinton is no stranger to the advent of new and growing technology as he “helped usher in a period of extreme growth and adoption of the internet” as president, according to a press release. In addition, as president, Clinton was responsible for overseeing programs that helped communities and individuals gain access to the internet.

The question-and-answer session will be hosted by former National Economic Council director and advisor Gene Sperling, who served under the presidencies of both Clinton and Barack Obama. Sperling is currently one of Ripple’s board of directors.

Meanwhile, Ripple’s cryptocurrency peer Bitcoin broke through the $8,000 price barrier over a week ago, but has fallen 8.25% to its current price of  $7,583.09 as of 2:00 p.m. ET, but is still up 13.8% the past month. Bitcoin got a flurry of positive news to help boost its price, including increasing interest from investment giant BlackRock, the world’s largest asset manager ($6.3 trillion in assets under management), who is assembling a team tasked with finding opportunities within the cryptocurrency space.

The cryptocurrency was able to shrug off the latest news regarding the SEC rejecting the application for a Bitcoin ETF by Winklevoss Capital Management founders Cameron and Tyler Winklevoss. In what could have been the first cryptocurrency ETF ever, the SEC did not agree with the Winklevoss’ premise that cryptocurrency markets are “uniquely resistant to manipulation.”

Furthermore, the U.S. Securities and Exchange Commission (SEC) is deciding on whether to approve a Bitcoin exchange-traded fund (ETF) or not–a request filed through the Chicago Board of Exchange (CBOE) by investment firm VanEck and blockchain platform SolidX. An approval of a Bitcoin ETF would help give cryptocurrencies a layer of authenticity, which could entice investors who are reticent on allocating capital into digital currencies.