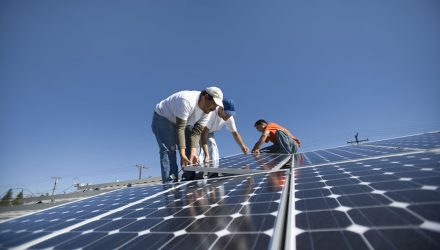 The Guggenheim Solar ETF (NYSEArca: TAN), the largest ETF dedicated to solar stocks, is up more than 32% year-to-date, a number that could rise as markets price in continued growth ahead for the solar industry.

In fact, solar is the world’s fastest-growing energy source. New data from the International Energy Agency (IEA) confirm as much.

“Solar power grew faster than any other source of fuel for the first time in 2016, the International Energy Agency said in a report suggesting the technology will dominate renewables in the years ahead,” reports Bloomberg.

“The IEA expects about 1,000 gigawatts of renewables will be installed in the next five years, a milestone that coal only accomplished after 80 years. That quantity of electricity surpasses what’s consumed in China, India and Germany combined,” according to Bloomberg.