You are at:Home»Investing»Beyond Meat Earnings Could Be Affected By Its Placement In Stores 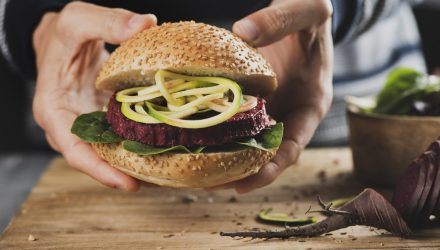 Beyond Meat Earnings Could Be Affected By Its Placement In Stores

With Beyond Meat soon to be releasing its first earnings report after the close of the market Thursday, retailers are still figuring out Beyond Meat’s best fit in their shopping aisles, most likely closer to the vegan section than the refrigerated meat department so desired by Beyond Meat.

Beyond Meat and its new meatless burger rivals are expecting to face stiff competition with traditional meat inside grocery stores. They avoid terms such as vegan or vegetarian, and request stores do not place their products in the supermarket vegan aisle where non-meat eaters traditionally buy tofu, tempeh and other plant-based alternatives.

“Find it in the meat aisle,” the company’s website says of its sausages and burger patties, which are made of yellow pea protein, coconut and canola oil.

The fresh meat section is one of the most regulated areas in a supermarket because space is limited and perishable items need to be chilled, according to Rick Stein, vice president of fresh foods at the Food Marketing Institute, the retail trade association.

This goal of Beyond Meat to compete side by side with traditional beef has upset the U.S. Cattlemen’s Association, which demands the meat case be reserved solely for real meat and says the new products create confusion and damage the trust consumers place in the meat case.

“These plant-based companies are riding on the coattails of the beef industry, which has spent decades building up a healthy brand consumers trust,” said Lia Biondo, USCA’s director of policy and outreach.

Some experts believe the stock has already priced in a lot of its upside, and earnings will have little effect.

“I do not see a very large move up because so much of what is good about the stock is out there,” said Sandeep Dahiya, an associate professor at Georgetown University who focuses on corporate finance.

According to experts, there is significant potential for growth if Beyond can meet demand. Its share price could see an additional 30% bump if it strikes a deal with McDonald’s, according to Jefferies.