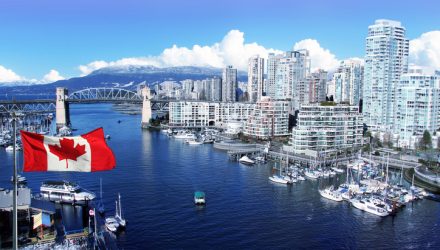 Some of this year’s top asset-gathering ETFs are low-cost funds tracking ex-US developed markets stocks. One of the dominant names in that group is the Vanguard FTSE Developed Markets ETF (NYSEARCA: VEA).

This year, international stocks are beating their U.S. counterparts as both the widely followed MSCI EAFE Index and the MSCI Emerging Markets Index are topping the S&P 500. The European economy is steadily improving, supported by a wide range of indicators, which may lead to above average growth for the remainder of the year and into the next. Eurozone growth has accelerated, with growth and business indicators showing positive results.

VEA follows the FTSE Developed All Cap ex US Index. Unlike the MSCI developed markets options, this FTSE index includes Canada exposure, along with major markets of Europe and Pacific regions. Canada makes up 8.0% of the fund’s underlying portfolio. The ETF added $10 billion in new assets in the first half of the year, a total surpassed by just a few ETFs.

VEA “owns more than 3,600 stocks across foreign developed markets and weights them by market capitalization,” said Morningstar in a recent note. “This approach promotes low turnover and skews the portfolio toward large multinational firms with global operations, such as Nestle, Toyota, and Novartis. Since the fund’s inception in 2007, its turnover ratio has averaged 8%, which helps keep transaction costs low. In contrast, the foreign large-blend Morningstar Category’s average turnover was greater than 50% in the most recent year.”