You are at:Home»Equity ETF Channel»Bear Market Over? Is A Bottom In For Stocks? 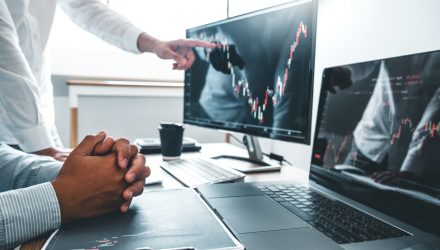 Bear Market Over? Is A Bottom In For Stocks?

This year has been unprecedented for many reasons, including the fastest drop to a bear market in history, amid the still rampant coronavirus contagion. But with the third up day in a row, bringing many of the indices up more than 20% from their lows, is the bear market already over?

It might be too early to say whether the bear market dead, but Thursday’s action was definitely impressive, with the SPDR S&P 500 ETF Trust (SPY) up 5.84%, the SPDR Dow Jones Industrial Average ETF (DIA) climbing a solid 6.14%, and the Invesco QQQ Trust (QQQ) rallying 5.27%. Despite the largest number of jobless claims in history, more than 3 million, stocks finished green once again, for the third day.

Nearly 3.3 million Americans filed initial jobless claims for the week ended March 21, notching the worst week in history. The second-worst number arose during the 1982 recession, but today’s report more than quadrupled that total. This didn’t stop the market from charging higher however, with the S&P 500 and Dow Jones Industrial Average both closing over 6% and the Nasdaq not far behind with a 5% pop.

This supports the saying on Wall Street that bear markets die on bad news, and Thursday featured some terrible economic data, although trumped by anticipation for passing the fiscal stimulus bill.

Looking at the history of bear markets, there are several unprecedented situations, however.

“We’ve never before entered a bear market because of a viral outbreak. But if you believe we haven’t hit the trough and we are in fact headed for bear territory, it’s useful to look to the history of bear markets to get a sense of their duration and intensity,” Oppenheimer said in an interview sent out by the bank to its clients recently.

The good news, however, is that bear markets triggered by externally driven shocks typically bounce back to their previous levels within 15 months.
So just days after the longest bull market in history took the quickest dive into bear territory ever, could it already be back charging into a bull market once again?

Analysts are skeptical, looking for a stemming of the coronavirus epidemic and the associated economic fallout before sustainable growth can occur.

“People have to contend with the idea that the longer that lasts, the more people potentially are losing their job,” said Yousef Abbasi, director of U.S. institutional equities at INTL FCStone. “So to see a sustainable rally at this point is going to be very difficult.”

Nevertheless, markets don’t portray the current state of affairs but are forward-looking, as we saw from the precipitous drop before the data even supported it.

But it could be a little while before a bottom officially forms, according to some experts.

For a bottom to start forming “we’ll need to see investors using that term, that it’s less bad,” said Quincy Krosby, chief market strategist at Prudential Financial. “That’s typically what you wait for to begin to invest in earnest instead of just trading.”

With that in mind, it will remain to be seen whether or not this bear is already a bull or not.