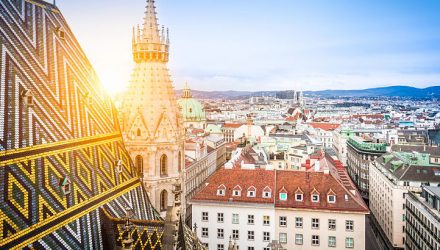 Austria ETF Up a Staggering 40.1% YTD

European stocks are among this year’s best developed markets performers. One of the single-country exchange traded funds benefiting from that trend in a big way is the iShares MSCI Austria Capped ETF (NYSEArca: EWO).

EWO, the only ETF dedicated to Austrian stocks, is up a staggering 40.1% year-to-date after soaring nearly 9% over just the past month.

Globally, European equity exchange traded product assets under management has increased by 26% since the end of June 2016 while total global ETP assets have risen by 30% over the same period. Year-to-date, $28 billion has found its way into European equity ETPs.

“As a member of the European Union, Austria has to stay within the fiscal guidelines of the Fiscal Compact, and this calls for government deficits no larger than 3% and government debt no more than 60% of GDP,” according to a Seeking Alpha analysis of Austria’s economy. “I would estimate that if present trends continue the government spend will approach the 3% limit and be nearly double what they were in 2016. This is very positive for the private sector and does explain the excellent performance of the Austrian stock market over the last 12 months.”