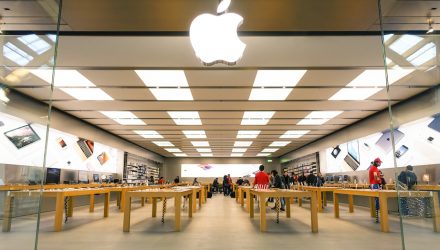 Apple Gains As Stores Scheduled To Reopen In New York

Apple has gained 2.59% today amid news that the company plans to reopen 10 stores in New York City this week, according to a statement from the company on Tuesday.

Plans to reopen the stores in New York City will be open “by appointment,” necessitating that customers plan a time to recover previously purchased products or obtain new service for their iPhone. This is the first time Apple has opened its store in New York since its March nationwide closures.

The reopenings in New York are an indication that commerce and business are beginning to re-establish themselves in the city after it became the primary hotspot for Covid-19 in the United States, where more than 17,000 people died.

Apple has begun opening stores in other areas like California as well, and by the end of the week, Apple will invite customers into 70 more stores around the United States, including the New York retail locations. In all, more than 200 of the company’s 271 U.S. retail operations will return to operations, although many are still confined to curbside service or shopping by appointment. Apple operates 510 stores globally.

“This week we’ll return to serving customers in many more US locations including by appointment in New York City, where we’re proud to stand beside New Yorkers as they emerge from this incredibly difficult time,” Apple said in a statement.

In May, Apple’s head of retail Deidre O’Brien posted a letter on the company’s website explaining how it planned to safely begin operations at its retail stores. Apple shuttered all of its stores outside Greater China in March as COVID-19 disseminated globally.

“Our commitment is to only move forward with a reopening once we’re confident we can safely return to serving customers from our stores,” O’Brien wrote. “We look at every available piece of data — including local cases, near and long‑term trends, and guidance from national and local health officials. These are not decisions we rush into — and a store opening in no way means that we won’t take the preventative step of closing it again should local conditions warrant.”

The company is closely following regulations on a region-by-region basis, providing space for social distancing, running temperature checks for employees, and requires face masks inside its stores. If a customer doesn’t have a face mask, Apple will provide one.

Apple shares have added more than 11% over the past month as the Dow Jones Industrial Average, which includes Apple as a component, has gained 14%.
For investors looking to use ETFs to trade Apple, the Technology Select Sector SPDR Fund (XLK), the iShares Global Tech ETF (IXN), and the Fidelity MSCI Information Technology Index ETF (FTEC) all have large allocations of the tech behemoth and got a boost Friday.
For more market trends, visit  ETF Trends.