You are at:Home»Featured»Analysts Warn Tech Stocks and ETFs May Be Getting Overcooked 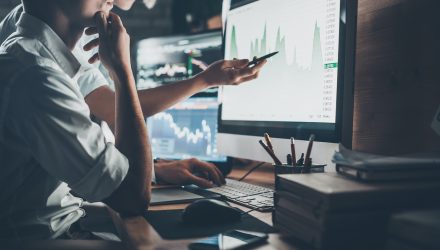 Analysts Warn Tech Stocks and ETFs May Be Getting Overcooked

Ian Young June 23, 2020
Are technology stocks becoming overbought here? Some analysts are beginning to think so.
As the Nasdaq races to a new high once again on Tuesday, and the five top stocks in the S&P 500 come from the Nasdaq, analysts are becoming concerned that perhaps this rally is getting overcooked and due for a pullback or consolidation.
When asked about whether tech stocks can continue their historic surge over the last several months, ignoring a continuing spike in coronavirus cases and any less than stellar economic news, some analysts are skeptical.
“I think you have to be really careful here. They’re overbought at this level. They’re great companies but you have to be really careful and diversified portfolio because so much money is going to stay at home stocks. Great cash flow but multiples are over 40 times earnings and I will take some time to actually prune some of those stocks. I’m not seeing sell the stocks. If you’re over-allocated to these five stocks And some of the others and Tech there’s too much money here. I think there’s much more opportunity in some of the other sectors, some of the beaten-down sectors like financials, industrials and even select health, and other areas of the market,” said Sarat Sethi, of Douglas C. Lane and Associates on CNBC.
For ETF investors, this could mean looking at ETFs like the Vanguard Financials ETF (VFH), the Fidelity MSCI Industrials Index ETF (FIDU), or the SPDR S&P Oil & Gas Exploration & Production ETF (XOP).
The stock market could be in trouble after its historic surge from the late-March lows as valuations become increasingly elevated, data compiled by RBC Capital Markets showed. RBC’s data reveals that the market tends to drop over the next year when valuations are this lofty, generating worries about the market’s performance going forward. For some analysts, this means looking for a diversified portfolio that avoids an overly heavy concentration on technology stocks.
“We don’t know what corporate earnings will really reveal. The brunt of those earnings will be in the second quarter. We think if things improve by the end of the year but still, there’s a lot of uncertainty. So what I mean for stocks is some pullbacks along the way even if the trend upward. You can expect a lot of volatility. Diversification is generally the answer to this type of volatility,” said Neal Richardson, an Edward Jones strategist on the same segment.

The S&P 500′s trailing price-to-earnings ratio, a generally accepted valuation measurement, is currently at 21.61. That’s near the highs seen in early 2020 when the broader market index was trading at an all-time high. The forward S&P 500 PE ratio, which is calculated using earnings estimates for the next 12 months, has popped to 22.18, near its highest levels in almost two decades.

“Valuations are a clear negative for the US equity market,” Lori Calvasina, head of U.S. equity strategy at RBC Capital Markets, said in a note.

Still, the Fed’s support for the market has been instrumental in driving stocks higher, and Calvasina notes that this is in-line with what markets have done historically.

“US equities look highly expensive again on 2020 and 2021 EPS,” said Calvasina. “While we acknowledge that Fed stimulus has inflated P/E multiples and is likely to continue supporting lofty levels, the expansion already seen is on par with what we’ve seen in most prior QE periods.”