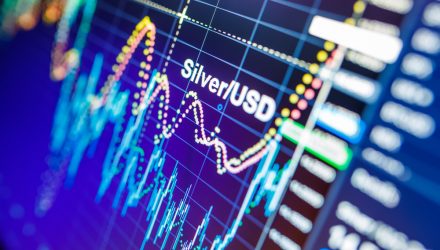 Silver futures and ETFs are stabilizing Thursday, as volatility continues to plague the industrial metal’s price, following a failed short squeeze by a group of retail investors.

Silver prices bounced modestly on Wednesday after the market’s significant tumble Tuesday, where silver futures and ETFs lost roughly 10%. The market is still substantially lower from Monday’s almost eight-year highs, but March silver futures are holding a 1.79% gain on the day, while the iShares Silver Trust (SLV) added 1.3%.

Despite the volatility, Goldman Sachs analysts, in a research report published Tuesday, restated their bullish stance for silver, projecting prices to climb as high as $33 an ounce as President Biden pushes onward with a plan to augment alternative renewable energy production.

Although there were attempts organized through social media and a Reddit post from Wall Street Bets to force a short squeeze in silver, similar to what happened in speculative equities like GameStop, Blackberry, and AMC, Goldman Sachs said the plan was likely to fail.

“While some shorts are speculative and require covering before expiry, most are driven by industrial producers hedging their forward earnings,” the analysts said in their note. “When commodity short positions are broadly backed by real physical stock, there will be no subsequent buying and no short squeeze.”

While some of the smaller stocks may be more susceptible to manipulation, in an interview with Bloomberg News, Jeffrey Currie, global head of Commodities at the investment bank, said that the silver market is valued at about 200 billion dollars annually, making it simply too massive for retail investors to manipulate.

“To corner the market and create a short squeeze, we estimate would require each one of the Wall Street Bet individuals to accumulate positions of around 4,200 ounces,” he said. “That is a lot of silver, and where are you going to put it.”

The bank also said that after the Hunt brothers notoriously attempted to corner the entire silver market in the 1980s, regulations arose that now make it nearly impossible to control the market.