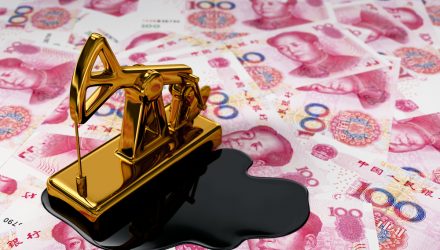 Energy-related exchange traded funds bounced back on Tuesday as China pledged its support for the economy, alleviating some of the previous demand side concerns from extended coronavirus lockdown measures.

Crude oil prices rebounded after flirting with around $100 per barrel in response to concerns over demand in China, the world’s largest crude oil importer.

China’s central bank on Tuesday said that it will raise prudent monetary policy to support the country’s economy, and the stimulus would help bolster oil demand amid concerns over a slowdown in global growth, Reuters reports.

“Oil traders are putting Beijing lockdown fears in the rear-view mirror and instead are focusing on more stimulus coming from China,” Phil Flynn, an analyst at Price Futures Group, told Reuters.

Oil prices previously retreated after China’s capital, Beijing, expanded its COVID-19 mass testing across the city of nearly 22 million as the population braced for potential lockdown measures similar to Shanghai’s stringent curbs that have already gone on for four weeks.

In Europe, Russian energy giant Gazprom told Poland’s PGNiG that it will halt gas supplies Wednesday morning, according to a PGNiG statement. Gazprom said that Poland would need to make payments under a new agreement as of Tuesday.

“Russia demanding payment in Rubles from Poland is likely to result in a halt in Gas supplies and will also contribute to even stronger diesel prices,” Shelton added.

Meanwhile, the European Union has been considering a cut to Russian oil imports as a potential sanction against Moscow over Russia’s invasion of Ukraine.

“Focus has shifted toward the demand side of the equation and worries about prolonged supply disruptions have greatly been mitigated by the release of 240 million bbls of SPR oil by IEA members and by the ostensible, albeit somewhat obscured, dealing in Russian oil,” Tamas Varga of oil broker PVM told Reuters.