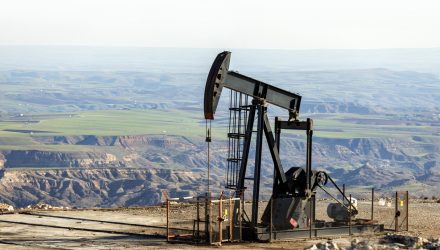 With increasing fears over the coronavirus, oil is following the stock market in a selloff, down almost 3% as of noon EST, and currently on track for its worst week since May 2019.

A decline in China’s economy as a result of the virus and traveling would impact demand since China is the world’s largest crude oil importer, after importing a record 10.12 million barrels per day in 2019, according to data from the General Administration of Customs. The massive Asian country is also the second-largest oil consumer, behind the United States.
On Friday, U.S. West Texas Intermediate crude futures lost nearly 3%, or $1.63, dropping below $54 a barrel, which rings in at the lowest level since Nov. 1. This is the fourth straight day of declines for oil and puts the contract on target to end the week with a decline of nearly 8%. Brent crude dropped 2.4% to $60.56, taking its weekly loss to roughly 6.5%.

Meanwhile, the United States Oil Fund LP (USO) is also following suit, with the ETF down nearly 2.5%, while leveraged fund, VelocityShares 3x Long Crude ETN (UWTI) is down almost 6%, and down almost 38% YTD.

The flu-like symptoms of the coronavirus, which was first identified late last year, has more than 33 million people now under travel restrictions in China, which could impact jet fuel demand. The timing is especially crucial with the upcoming Chinese New Year commencing tomorrow, representing the world’s largest annual human migration.

“When cities are placed under quarantine, and public transit is shut down, by definition that reduces economic activity and has a negative impact on energy demand, oil included,” Raymond James analyst John Freeman said in a note to clients Friday. “Once there is evidence that the outbreak is contained and thus economic disruption subsiding, sentiment on oil should improve, bringing prices back up.”

Freeman said oil’s price action is an indication that the market is assuming that “the situation [coronavirus]will get worse before it gets better.”

Nevertheless, some on the Street, including Citi’s Eric Lee, feel that the move lower will be “short-lived.”

“The sell-off following the outbreak of the coronavirus in China looks overdone, even for a market that increasingly shrugs off geopolitical risk,” he said in a note to clients Thursday night.