You are at:Home»Alternatives Channel»Crude Oil Descends Quickly After Iran Fears Are Mitigated 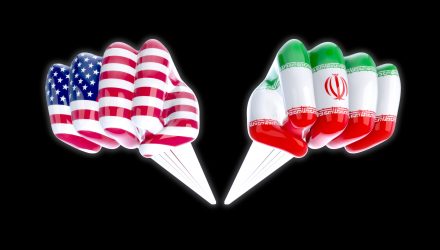 WTI crude oil climbed nearly $3 a barrel on Wednesday to reach $65.50 before falling off dramatically after concerns over the Iran counterattack eased. Oil is trading below $60 a barrel, while stocks have once again approached all-time highs.

President Trump assuaged markets, tweeted, “All is well! Missiles launched from Iran at two military bases located in Iraq. Assessment of casualties & damages taking place now. So far, so good! We have the most powerful and well equipped military anywhere in the world, by far! I will be making a statement tomorrow morning.”

Still, there is considerable debate about where the price of oil will be in the coming year.

Oil tycoon Harold Hamm predicts crude oil prices to reach $75 a barrel, regardless of the outcome of rising tensions in the Middle East that has sent crude to multi-month highs.

‘I think we’re probably headed for $75 oil price in the next six months,” said Hamm. “That’s where the market’s going, and we’ll get there. It’s not too much to ask.”

While past shocks to the oil market, such as the drone attack to Saudi Aramco last September, have resulted in initially massive rallies of as much as 20%, followed by a move back down to prevailing levels, some analysts believe the same type of action could be in the works this time.

“It is unlikely that oil prices will soar to levels that will cause yet another global recession,” Ed Yardeni of Yardeni Research wrote in a note on Monday. “If Middle Eastern oil supplies are disrupted, ample strategic petroleum reserves are available to mute any oil price shock. Higher oil prices would also stimulate even more oil production by US frackers.”

Still, after years of languishing, in 2019, Brent crude gained 23% and WTI gained 35%, posting their best annual performances since 2016.

Other analysts see this as possibly just a short term disruption to the oil markets.

“I think the markets are more rational about this particular subject than a lot of subjects. …There’s not a lot of belief the Iranian leaders would want to do things that would seriously make this conflict a lot worse,” said Don Townswick, director of equities strategies at Conning, which provides services for the insurance industry and other clients. “All that really does is give the administration the ability to treat Iranian leaders like they did Soleimani. I just think the market isn’t worried about it. I also think the threat to the oil supply is not as dramatic as it was because of increased U.S. production.”

For investors looking to take advantage of any appreciation in crude, the Vanguard Energy ETF (VDE) and the iShares U.S. Oil & Gas Exploration & Production ETF (IEO) are two energy ETFs to consider.