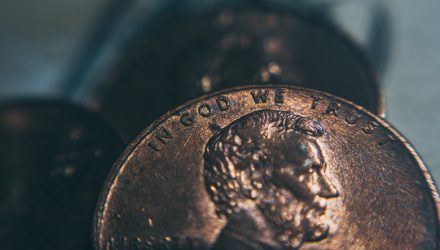 Copper has been a laggard in the metals complex this year, but the iPath Series B Bloomberg Copper Subindex Total Return ETN (NYSEArca: JJC) is coming off a strong October and there are inklings that rally in the red metal could be extended.

“Concerns about China’s manufacturing slowdown and the Sino-U.S. trade dispute have manifested themselves in a big fund short position on the CME copper contract since June,” reports Reuters. “That big short, however, has shrunk a lot over the last couple of weeks as the prospect of some sort of trade deal becomes more credible.”

Several months ago, copper hit a bottom-barrel two-year low as chaos was ensuing in equities. Due to copper’s widespread use, particularly when it comes to home building and commercial construction, it’s a good measuring stick of how well the economy is doing. Good news: sentiment toward the red metal is improving.

“London copper, meanwhile, has seen a flurry of interest in the options market with buyers looking for upside exposure next year,” according to Reuters. “This is still a tentative turnaround but it seems as if the money men are starting to look beyond the copper-negative Trump tariffs trade.”

A supply deficit is also brewing and those deficits usually spark upside in precious and industrial metals.

“Money managers held a net short position of 17,838 contracts on the CME copper market as of the most recent Commitments of Traders Report,” reports Reuters. “One month ago, that collective short position was 62,741 contracts and three months ago it was 74,597 contracts, an all-time record in terms of bear positioning.”