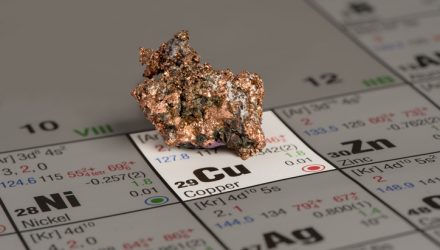 The iPath Series B Bloomberg Copper Subindex Total Return ETN (NYSEArca: JJC) has recently posted some modest upside, rising about 2% over the past week, but the copper exchange traded note (ETN) remains more than 11% below its 52-week, prompting some market observers to deliver split views on the red metal.

“Funds remain heavily short, betting that copper demand is set to worsen amid what is looking like a synchronized downturn in the global manufacturing sector,” according to Reuters. “The copper price is starting to buckle under the weight of speculative selling pressure but it’s not yet ready to collapse.”

“Market sentiment was helped by the prospect of renewed trade talks between the United States and China but also by copper’s still robust internal supply-demand dynamics, not least China’s continued appetite for imported metal,” reports Reuters.

“The latest Commitments of Traders Report showed funds holding outright short positions of 117,898 contracts as of last Tuesday, within touching distance of the all-time record of 118,448 contracts seen in the middle of last month,” notes Reuters.