You are at:Home»Featured»Airlines And JETS ETF Soar Despite Scheduled Expiration of Federal Aid 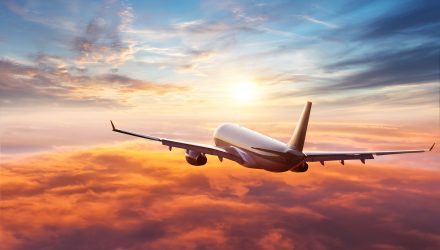 Airline stocks are lifting related ETFs on Wednesday, despite the fact that billions of dollars in federal airline aid are scheduled to expire early Thursday, which could result in over 30,000 job cuts.

Airline executives of major companies like American, United, Southwest and JetBlue have been lobbying in Washington to convince lawmakers and White House officials to extend financial aid amid pending job cuts. The proposal has gained bipartisan support and could be part of the still hotly contested national coronavirus aid package, including a $2.2 trillion package unveiled by House Democrats on Monday.

Treasury Secretary Steven Mnuchin was hopeful that the House and the administration could complete a deal that includes that aid, which is helping to boost airline shares Wednesday.

Despite the potential for a bailout, airport statistics reveal that demand has fallen to around 30% of 2019 levels and carriers continue to hemorrhage cash, a problem which Airline executives don’t expect to be ameliorated anytime soon.

“This isn’t about raising funds for the airline,” American Airlines CEO Doug Parker told CNBC’s “Squawk Box” on Wednesday. “This is about keeping the infrastructure in place by having us be paid to pass on to our team members who we otherwise don’t have work for to keep them in place.”

Fueled by optimism over a potential stimulus deal on the last day of September however, stocks from American, United and JetBlue rallied over 2% Wednesday, while Delta shares gained nearly 2%, and Southwest advanced about 1%, helping to lift the U.S. Global Jets ETF (JETS) by 1.84% as just after 12PM EST.

American and United constitute the bulk of the involuntary job cuts, but airlines are also finding help from their employees.

Some workers at United for example, agreed to limit their schedules, which translates to more modest paychecks. Such actions by employees would head off scheduled furloughs of nearly 4,000 pilots until at least June.

“The larger reductions in headcount achieved from voluntary retirement or other separation programs through this month will further lower labor expense relative to the 2019 third quarter component of the CARES Act base,” Moody’s Investors Service said in a note Tuesday.

Meanwhile, many other workers are choosing to observe what will happen going forward.