You are at:Home»Featured»Agricultural ETFs Jump Amid Crop Report Revisions 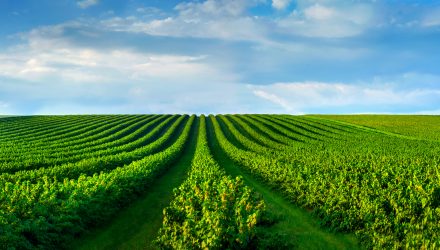 Corn and soybean futures rocketed higher on Tuesday amid a decline in crop yields, sending agricultural ETFs higher as well.

March corn futures gained 5.08% amid the news, climbing 25 cents, the daily limit, to $5.17 1/4 a bushel. Meanwhile, March soybean futures rallied 3.68%, or more than 50 cents. Both corn and soybean futures traded at the highest level for most actively traded contracts since mid-2014, according to FactSet.

Jack Scoville of PRICE Futures Group, says that a decline in soybean stocks will result in a bullish USDA Report.

“The last time we had ending stocks this low we traded to significantly higher prices. I have a hard time thinking USDA will go that low, but they could. I think a small cut is in order but USDA will not likely show the big crop. That is not in their history,” Scoville says.

Scoville added that he “will be watching both the beans carryout and the corn carry out. And the South American estimates for any drop at all in production. Corn could really drive higher with a bullish estimate and beans too.”

Today’s report is extremely important and will have far-reaching effects, Scoville says.

“We could go either way based on the numbers, although I tend to think up is more likely. I think the market will be supported on breaks due to the overall situation, even if USDA finds a bit more beans,” Scoville noted.

Peter J. Meyer, head of grain and oilseed analytics at S&P Global Platts, says that after a year like 2020 it is very challenging to prognosticate production changes.

“However, I would expect minimal changes in both corn and soybeans. On the demand side of soybeans, we may see a 50-million-bushel increase in exports given the pace of sales. With no changes in supply, that would put carry out at 125 million bushels. Hard to see a carryout lower than 100 million given the pace of total demand, but it was 2020 after all, so anything is possible,” Meyer said.