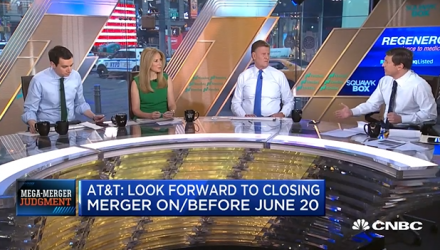 The landmark decision on Tuesday to greenlight the $85 billion AT&T-Time Warner deal by U.S. District Court Judge Richard Leon lifted media ETFs in early Wednesday trading. The decision by Judge Leon will essentially open the floodgates for other mergers to commence.

“This decision could serve as a ‘green light’ for other potential M&A, including Comcast’s ongoing pursuit of FOX,” said John Hodulik, an analyst at UBS.

The markets are bracing themselves as other vertical mergers are likely to occur.   Comcast is planning to put in a bid with Disney to purchase Twenty-First Century Fox assets, such as 39 percent of British satellite TV provider Sky Plc and Indian media conglomerate Star.