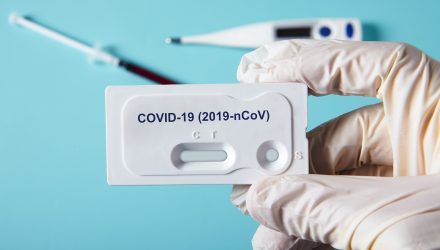 Abbott Laboratories shares have climbed by over 4% on Thursday after it reported first-quarter earnings and revenue that bested Wall Street’s predictions, and is helping to boost ETFs that hold the healthcare company.

On an adjusted basis, the company reported first-quarter earnings of 65 cents per share, better than the 58 cents analysts polled by Refinitiv expected.

Despite beating analyst’s forecasts, Abbott put off its full-year forecast, citing uncertainty amid the coronavirus outbreak, which has now infected more than 2 million people worldwide and killed at least 139,419 as of Thursday, according to data from Johns Hopkins University. Demand for some of the company’s other diagnostic tests dropped during the quarter as most Americans are following stay-at-home orders to stem the spread of the virus.

As President Trump pushes for the country to reopen as soon as possible, Abbott is on track to ship 4 million of its new antibody tests in April, which indicate whether a person has had Covid-19 in the past and was either asymptomatic or recovered, Abbott CEO Robert Ford said during an earnings conference call with investors Thursday. The healthcare giant plans to increase production to 20 million shipments per month, commencing in June, he said, adding there’s a need to manufacture more tests.

“It’s clear that the demand for testing is big, it’s not going to go away,” he told investors.
The company is also working with outside distributors like CVS Health to ensure its tests reach a larger extra-hospital sphere, including places like urgent care clinics and nursing homes, Ford said. “Our first phase was to roll this out to ensure the frontline workers were tested and protected. As we start to ramp up manufacturing … we’ll start to implement those actions into the month of May into June.”

Healthcare ETFs that hold Abbott are getting a boost today despite languishing stocks. The iShares U.S. Medical Devices ETF (IHI), which focuses on big Pharma, including Abbott, is up over 1% today. Meanwhile, theiShares Evolved U.S. Healthcare Staples ETF (IEHS) climbed 1.43% as well, with holdings like UNH and JNJ, which gave solid performances on Wednesday, helping to boost the IEHS.