You are at:Home»Equity ETFs»5 ETFs with Amazon Up and Trump Isn’t Happy 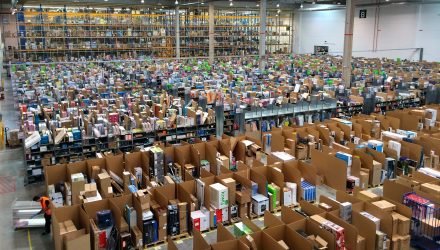 5 ETFs with Amazon Up and Trump Isn’t Happy

With the decline of more brick and mortar retail stores, it’s no surprise that ETFs with exposure to Amazon are all up and President Donald Trump is not happy about it.

Trump blames Amazon for the decline of brick-and-mortar retailers and the pain that has caused real-estate developers. According to the Axios reporter Jonathan Swan, Trump believes Amazon is a negative force for smaller, locally owned retailers and wants to find a way to curve the company’s dominance.

The Supreme Court is considering a case that could give states more power to collect sales tax on online retailers.

Related: Retail Sales Down: What About Retail ETFS?

Let’s take a look at the Top 5 ETFs with Amazon exposure as of 11 a.m. Eastern time.

5 ETFs with Exposure to Amazon

Trump hasn’t been private about his dislike for Amazon and its CEO, Jeff Bezos. He tweeted,  “Amazon is doing great damage to tax paying retailers,” Trump tweeted in August. “Towns, cities and states throughout the U.S. are being hurt – many jobs being lost!”