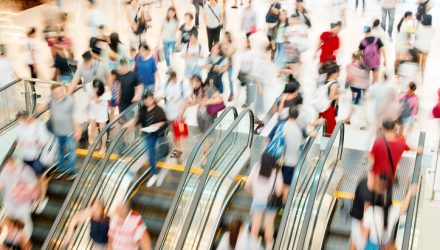 Retail Sales Down, What About Retail ETFs?

U.S. retail sales declined for a third straight month (December 2017, January 2018, February 2018), which points to a slowdown in economic growth for the first quarter and poses interesting questions for retail ETFs.

Department stores, furniture stores, health stores, personal care stores, and gasoline stores were all down. However, internet retailers and restaurants were up. The Commerce Department said retail sales slipped 0.1 percent last month instead of falling 0.3 percent as previously expected.

There was no growth in January excluding food and energy and people were disappointed as they were expecting an increase. However, February saw more full time workers (313,000 jobs) and wage increases than last year and the unemployment rate was reported at 4.1% – the lowest since December 2000.

However, despite wage and full time worker increases, people still chose not to consume as much and hence, stimulate the economy. This could mean that consumers will also save their tax cut rather than spend it, which could hurt the economy. This could be a  warning sign for Wall Street because the earning projection for this year presumes that consumers  spend their tax cut.

Rising interest rates and debt servicing are possible reasons that consumer spending is down. The dollar also went down after the data. According to Reuters, “economists believe that a tightening labor market, weak dollar and fiscal stimulus from the tax cuts and increased government spending will lift inflation toward the Fed’s 2 percent target this year.”

There is still a lot of slack in the market, but people are hoping that the tax cut will stimulate the economy and that when people begin to trust their new full time work and wages, they will begin to spend more.

On the bright side, the core PPI score was up to 2.7 from 2.5 percent in January, which means that consumer inflation may pick up in 2018.

Here’s a look at how three retail related ETFs are tracking year-to-date, according to Yahoo Finance.

ETFs that help investors capitalize on the misfortunes of brick and mortar retailers have seen green. The ProShares Decline of the Retl Store ETF (EMTY) is up 1.12% while the Proshares Long Online/Short Stores ETF (NYSE Ara: CLIX) is up 1.45%.

Meanwhile, the SPDR S&P Retail ETF (XRT) is down .02 %. This ETF remains one of the worst performing areas of the market this year.