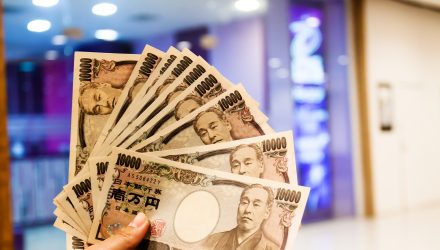 As the Japanese yen begins to depreciate against the U.S. dollar, investors who want to tap into the export-oriented economy may consider currency-hedged ETFs to diminish the negative effects of foreign exchange currency risks.

“It’s worth keeping an eye on this $/Y momentum, as we have seen Fx-hedged Japan products become very active in the past under these conditions,” according to a Virtu note.

The Bank of Japan still has a lot of leeway in allowing the Japanese yen depreciate against the U.S. dollar.

“The BOJ would want to stop that before the yen gets too weak,” Masahiro Kawai, a longtime associate of BOJ Governor Haruhiko Kuroda, told Bloomberg, adding that such a move wouldn’t indicate a policy exit. “The limit is maybe 125 per dollar – 130 is obviously excessive.”

A weak yen has been an unspoken policy objective as it would help stoke inflation, but too much weakness can also weigh on business that import raw materials and consumers would also see higher prices on imports. Consequently, some traders call the zone around 125 yen to the dollar the “Kuroda line.”