You are at:Home»Investing»Yale’s Robert Shiller: Bitcoin an ‘Epidemic of Enthusiasm’ 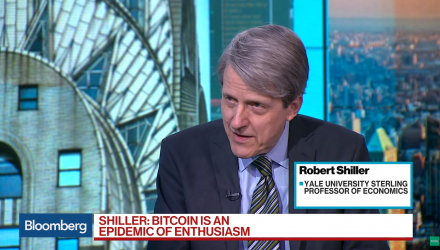 Bitcoin is a “social movement” and an “epidemic of enthusiasm,” according to Robert Shiller, Sterling Professor of Economics at Yale University.

Shiller appeared on “Bloomberg Surveillance” on Tuesday to share his explanation for how and why investors are attracted to the cryptocurrency, specifically, which factors he believes can be attributed to the digital currency’s success in gaining considerable traction.

“It’s generational and geographic,” he said, and added that “the east coast is less into it than the west coast—Silicon Valley is really into it. This to me shows that this is not a rational response to new information.”

Although Shiller stated that bitcoin is a “speculative bubble,” he refused to rule out a hopeless future for the currency.

“Speculative bubbles recur,” he said. “We had a bubble in bitcoin in 2013, and it looked like it was done… but now look, it comes back.”