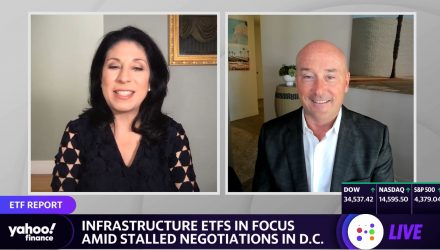 Lydon notes that people have been warned that it’s a good idea to start their holiday shopping now, looking at how things are going. With that said, it’s important to note a few ETFs where investors are currently concentrating their money as a result.

He points to the ProShares Online Retail ETF (ONLN), along with the Emerging Market Internet and eCommerce ETF (EMQQ), which hosts the vast majority of all emerging market online buying.

“We can’t wait around until November to do our holiday shopping. It’s going to start now, and numbers are going to see through that this has been happening,” Lydon adds.

Lydon also notes that money is already flowing into those funds as people are in the stores seeing that they cannot get everything they want. As a result, the shoppers are heading online for great opportunities. With that in mind, it’s important to note that online buying still only makes up 16% of retail sales, so there’s much room for growth.

It’s never been more crucial to prepare for the holidays as the nation deals with global supply chain delays. @TomLydon discusses with @AlexisTVNews on @YahooFinance. Full segment: https://t.co/Izbpxa4g1g pic.twitter.com/M5lILO6L5S

With a vote on the bipartisan infrastructure bill set to occur on Thursday in the House, there’s a question of whether or not uncertainty will lead to certain ETF benefits for investors. Lydon explains that advisors have been considering this for months and have several funds to point to that specialize in infrastructure.

The leading performer is the Global X U.S. Infrastructure Development ETF (PAVE), which has done well by focusing only on the U.S. and dealing with areas that need attention, such as roads and railroads. With that in mind, this is a global issue, as Lydon points out, which is why the FlexShares STOXX Global Broad Infrastructure Index Fund (NFRA) could be something to check out as well.

Taking another look at the potential collapse of Evergrande and Chinese ETFs, there’s a question of whether people are taking on risks and moving into that area. Lydon is quick to point out that struggles with China’s economy have been and will likely remain a concern, whether they be regulations, saber-rattling, or the Evergrande situation.

With that in mind, there have been Chinese stocks and ETFs that have suffered. Still, there are broad-based ETFs for those who believe this to be a buying opportunity, including iShares’ MCHI and KraneShares’ KWEB.

KWEB is a particularly inspired choice, as the current decline has brought in billions of dollars thanks to a lot of bottom fishing that’s taking place. “If you feel like China’s always going to be a part of our capital markets, this may be that buying opportunity, and a lot of people are wading in,” Lydon states.