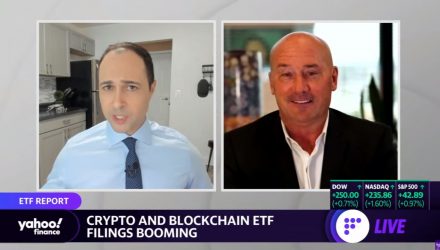 While ETF flows continue to be at record highs, investors are still shifting their priorities. Joining the “ETF Report” with hosts Julia La Roche and Brian Sozzi on Yahoo Finance, ETF Trends’ CEO Tom Lydon discusses the evolution of indexing and ETFs, along with some more thoughts on crypto investing.

As Lydon explains, the ETF industry was built on the back of traditional indexes such as the S&P 500 and the Dow, doing very well in the process. That said, with such a high concentration on these indexes, investors are looking for innovative areas in the marketplace.

“Traditionally, we look at sectors if we wanted to overweight areas like financials or technology.” Lydon states. “But, innovation has hit ETFs in a big way, as there are a lot of thematic strategies.”

“Value has been unloved for an extended period of time,” @ETFtrends CEO @TomLydon says. ”So expect that if we do see tapering or even rising interest rates, companies like banks… should do very well.” Full interview: pic.twitter.com/BPwXNXjpSi

More specifically, Lydon refers to a lot of disruptive technologies such as robotics, clean energy, and cloud computing. They are not heavily weighted in traditional indexes. The ETF issuers have done a good job listening to the average investor and advisor and noting how the overweighting leads to suggestions of other ETF-related areas that could prove successful. As a result, there’s been an explosion in popularity and assets.

Regarding the possible impact the Fed’s moves could have on a portfolio, from an ETF perspective, Lydon notes how the largest concern would not be with equity but on the fixed income side of things.

Lydon adds, “If we do have rising rates, if we actually do have inflation, then the benchmark Barclay’s Ag is not going to do well for you. It’s not going to keep up with inflation. Instead, advisors are already doing two things. 1. They’re moving more money to cash. 2. They’re looking for alternative income strategies.”

However, it is clear that if rising interest rates kick in on the equity side, growth stocks would be affected. The big disparity between value and growth has shown how value has been unloved for a long time, and tapering or rising interest rates should be expected to lead to banks doing very well.

Call Out To Crypto

In reference to the mood surrounding cryptocurrency investing, Lydon notes that the advisor interest has increased year after year, as well as client increase. Of course, there is notably still no pure Bitcoin or Ethereum ETF. While that seemed potentially viable for 2021, the guidance from the SEC chair has been more futures oriented.

“Because the futures market is regulated, I think we’ll probably see some ETFs by the end of the year that will be tied to Bitcoin and Ethereum but will be specifically futures based.” Lydon states.

This will be a relief for the marketplace, as those with Fidelity accounts, for example, will be able to buy an ETF that will be representative instead of venturing to a different platform.