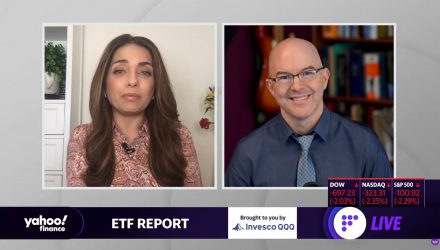 As it’s been a rough ride for markets as of late, it’s important to know how investors can position themselves, given all the volatility. Dave Nadig, CIO and director of research at ETF Trends, joined the ETF Report on Yahoo Finance to discuss what’s going on so far in 2022, after a previous year featuring record inflows and what sectors look like the safest bets.

As Nadig explains, after a previous year featuring nearly $900 billion in inflows, that may not be something repeatable, but flows are still going strong. They have been very strong in equities, despite what’s happening with the markets. For Nadig, the most interesting aspect is how much attention sector funds have gotten, after being forgotten by investors for the past couple of years, in favor of thematic ETFs.

“What we’re seeing is really classic rotations into both inflation and rising rates plays,” Nadig states. He believes that shows how financials are really the place to look the tightest. Financials looked great last year and is currently among the best now.

As far as why this rotation is occurring, Nadig points out how the balance between the curve shifting and rates coming up can prove to be tricky, especially with banks coming off of a very strong 2021.

“Sector funds largely got forgotten by investors over the last couple of years in favor of thematic ETFs — things like ARKK,” @ETFtrends CIO @DaveNadig says. “But what we’ve seen just already this year is a lot of interest in traditional sector rotation plays.” Full interview: pic.twitter.com/qWN0Iwi6Pa

As far as other places to look, Nadig points out a fund that’s less focused on mega-cap. This would be the Invesco S&P 500 Eql Weight Financials ETF (RYF), which features the same stocks that can be found in the XLF. It’s more expensive but proved to be worth its value by overcoming other funds in 2021.

For a more traditional cap-weighted exposure, Nadig points out the Fidelity MSCI Financials Index ETF (FNCL). This fund tracks the MSCI version of a financial index and adds many more names, including 400 securities, to help dilute some of the exposure to the mega-cap names. It’s also a less expensive fund at only eight basis points.

Switching thoughts to gold, Nadig points out how terrible a trade it was last year, with investors pulling out. This year, so far, it’s a reverse situation. GLD is the highest gaining asset-gathering ETF so far this year. It’s being used as a safety play, but that’s a usual line of reasoning. If there’s a caveat, Nadig notes that it has turned out to be hot money – a trading vehicle for getting short-term exposure to bullion.

Nadig states, “I wouldn’t read into that as the market running to safety. I would read into that as people are nervous and are looking to stay invested in something, and they don’t like the U.S. dollar sitting in a bank account.”