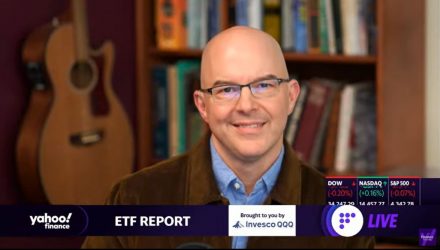 With energy prices going through the roof year-to-date, there are various opportunities out in the market. Joining the “ETF Report” with host Alexis Christoforous on Yahoo Finance, ETF Trends’ CIO and director of research Dave Nadig discusses the energy sector, his picks for investors in this environment of higher inflation, and the latest market news regarding China.

Nadig makes it clear that the big winners are the funds directly tied to the prices of some of the commodities that are soaring. For example, the U.S. Oil Fund (USO) is up 65% for the year, and the U.S. Natural Gas Fund (UNG) is up 115%, which is great for the investors that caught onto those ETFs.

For most investors worried about the longer-term inflation picture, Nadig believes that a core commodities exposure makes more sense than trying to pick and choose which of these individuals will be the big winner going forward. Specifically, Nadig notes the Invesco Optimum Yield Diversified Commodity Strategy No K-1 ETF (PDBC), a very simple broad commodities fund that provides some energy exposure, as well as agricultural components, precious metals, industrials, and more to paint the field of this growing inflationary environment.

“For many investors, that core allocation to commodities has been a big rescue over the last six to seven months as we’ve seen the prices rise,” Nadig adds. “If you’re looking for a way to profit from some of these shorter-term spikes, I think that’s a good way to do it.”

“For most investors who are worried about the longer-term inflation picture, I think a core commodities exposure probably makes more sense than trying to pick and choose which one of these individuals is going to be the big winner going forward,” ETF Trends CIO @DaveNadig says. pic.twitter.com/f59kFueeNs

Shifting gears to discuss the KraneShares Trust China Internet ETF (KWEB), this ETF is about 40% down year-to-date, 56% from its peak. This is a sector that’s been beaten down, prompting the question of whether or not it’s time for investors to jump in on it. While Nadig believes that people may be thinking that this has to do with a short-term economic control taking place, he thinks that it’s really about re-establishing command and control of the Communist party. With that in mind, looking under the hood of things like KWEB, these are not the sort of stocks being set up to be crushed.

Nadig adds, “China’s not going backward. They are not going to give up on the internet revolution. They’re just changing the rules of the game locally, inside their country. They still need to capitalize on their ability to be dominant around the world.”

KWEB, at this point, has been a falling knife. Billions have flowed into that fund within the last 6–10 weeks, a smart money play. While Nadig can’t quite call a bottom to all of this, it does seem to him as though the worst is over.

Looking over to the deal in Washington D.C, if it can lead to an extended debt limit and help avert catastrophe, lawmakers can then think about the infrastructure bill. Does all of this equal high demand for infrastructure companies?

According to Nadig, no. He has seen that level of demand fall off quite a bit in the last few months. Despite attempts by some investors to get in through NFRA and PAVE, the level of momentum has waned, seeing how hard it is to get meaningful infrastructure spending through this Congress. That doesn’t mean that it still can’t happen, but this is not an easy ETF trade.

“If we do get this deal to go through, and we do get that spending package,” Nadig continues, “it will be short-term great for the U.S. economy. I think we’ll see a big rally in the fourth quarter if everything is sliding through as we often expect. But I think ‘Falltober’ is probably going to live up to its name.”