You are at:Home»Featured»Women in ETFs March Toward Equality 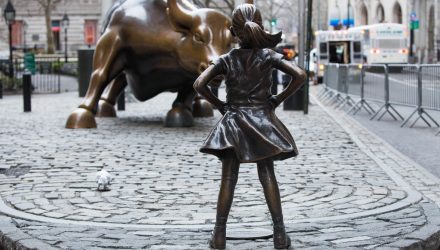 Women in ETFs March Toward Equality

In the last 100 years, women and men in the United States have marched towards gender equality with their heads held high.

In 1920, women gained the right to vote. In the 1960’s, several court cases granted women the right to work in previously male dominated jobs.In 1976, Supreme Court upheld women’s rights to unemployment benefits during the last three months of pregnancy.

In 2000, CBS agreed to pay $8 million to settle a sex discrimination lawsuit by the E.E.O.C. on behalf of 200 women. And in 2016, Hilary Clinton became the first women to run for President of the United States.

The march is moving forward. But the distance is long.

And the path unpaved.

How much further to go?

According to Variety, “Women make up more than half the workforce in the S&P 500’s financial services firms, but only 2% are CEOs. And while hedge funds have multiplied like rabbits during the past 25 years, women accounted for only 9.4% of the roughly 7,700 fund managers in the U.S. in 2015, according to Morningstar research.”

That is why events such as Ring the Bell for Gender Equality, a global collaboration put on by 64 stock exchanges around the world are so important. The event is a partnership between Women in ETFs, UN Global Compact, UN Women, the Sustainable Stock Exchanges Initiative, IFC, and the World Federation of Stock Exchanges. The purpose is to advance gender equality and sustainable development by encouraging participants to make commitments to improve gender equality in their markets.

Out of the 64 bell ringing celebrations, Women in ETFs is the lead partner on 18 events. Jillian DelSignore, President of WE and Head of ETF Distribution and JP Morgan Asset Management said,  “The growth in the ETF industry has provided women with incredible opportunities to grow their careers as the industry continues to evolve.  The incredible growth to over 4000 members globally helps to illustrate that Women in ETFs continues to serve as an important outlet for all of us to connect with each other.”

However despite trail blazers like WE, finance has been one of the slowest industries to progress. In an industry dominated by males, money, and hence- power, this comes as no surprise. However, times are changing and initiatives such as State Street’s, Fearless Girl, a campaign that focuses on the power of women in leadership are making a difference.

State Street Global Advisors placed Fearless Girl near Wall Street to symbolize the need for more women in leadership. This sparked a global conversation with more than 5 billion media impressions in 12 weeks. State Street Global Advisors called on over 700 companies they invested in that didn’t have a single woman on their board and demanded that action be taken. They voted against over 500 companies that failed to take steps to add a woman to their board and ultimately proved that businesses with strong women in leadership perform better citing a 36.4 percent average increase in return on equity.

So, what about all the girls and women out there who are trying to navigate’s today’s unequal plains? And entering the world of finance?