You are at:Home»Featured»With USO Down And Crude Crashing, Which Oil ETFs Should Investors Consider? 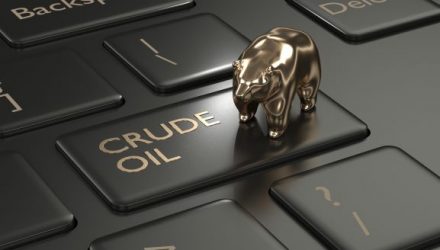 With USO Down And Crude Crashing, Which Oil ETFs Should Investors Consider?

In an unprecedented day of trading on Monday, the price for the May contracts in West Texas Intermediate crude oil destroyed all market value, breaking every low for oil prices since 1946.

The CME ex permitted the futures contract to trade below zero, with markets trading as low as nearly an unbelievable -$40 a barrel. For those unfamiliar with Futures trading, that means that to avoid taking literal, physical delivery of oil at Cushing, OK, holders of the futures contract had to pay to unload before expiration. The extreme move displays the incredible surplus that exists in the U.S. oil market as a result of industrial and economic activity that has been stymied as governments around the globe continue to enforce quarantines and stay-at-home regulations due to the rapid spread of the coronavirus.

As part of the crude oil carnage, trading in the popular retail ETF, United States Oil Fund (USO), which is designed to follow the front-month futures price of oil, was briefly halted Tuesday before the opening bell. When the fund resumed trading, it plunged 17% despite the fund not holding any of the May contracts in question.

The halt came after USCF, the manager of the fund, said that it was temporarily suspending the creation of new shares of the ETF, as so much new money had entered the fund in the past week that it reached the limit on the number of shares authorized by the SEC.  The fund has applied to raise the number of shares available dramatically, but this usually-routine process will likely take several days.

Without the ability to create new shares, USO now trades like a closed-end fund.  Any new buyers will likely have to pay a premium to gain access (or seek their exposure in competitive funds).

According to John Davi, founder and CIO of Astoria Portfolio Advisors, USO is mainly purchased by retail investors, which can be risky for those who believe they are betting on oil prices moving higher over time, without fully grasping the dynamics in the commodity market.

“To buy USO, you have to understand the oil futures market,” John Davi, founder, and CIO of Astoria Portfolio Advisors, told CNBC. “They [retail investors]just buy the ETF because they think the price of crude will go up, but they don’t understand the drivers, which are fairly complicated.”

While it’s impossible to know precisely who owns what shares of any ETF, recent activity by the millennial-favorite broker, Robinhood, suggests calling the bottom in oil through USO had recently become a popular activity:

So which alternative oil ETF can investors consider if USO is out for the time being?  A favorite of many longer-term oriented advisors is the Invesco DB Oil Fund, DBO.

DBO is a liquid fund that is suitable for institutional levels of trading and optimizes exposure to the fluctuating price of oil contracts, picking individual months (or tenors) of oil futures to own to minimize the costs of rolling from near-term positions into longer-term positions.  That regular roll cost can be punishing when Oil is in steep contango (which it has been recently).  DBO seeks to combat contango by rolling into whichever contract month (within the next 13) looks most attractive by its rules, rather than merely rolling into front-month contracts.

According to Invesco, “The Invesco DB Oil Fund seeks to track changes, whether positive or negative, in the level of the DBIQ Optimum Yield Crude Oil Index Excess Return™ (DBIQ Opt Yield Crude Oil Index ER) plus the interest income from the Fund’s holdings of primarily US Treasury securities and money market income less the Fund’s expenses. The Fund is designed for investors who want a cost-effective and convenient way to invest in commodity futures. The Index is a rules-based index composed of futures contracts on light sweet crude oil (WTI).”