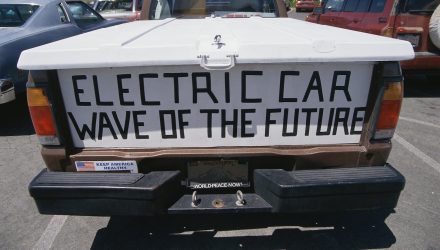 In the latest bout of trouble for Lordstown Motors, the electric car company that operates out of a former GM plant, the company said Monday that CEO Steve Burns and CFO Julio Rodriguez have stepped down from their posts. Lordstown is actively seeking permanent replacements.

The resignations arrive amid an ongoing internal investigation of the company’s operations into claims by short-seller Hindenburg Research that it deceived investors. The Securities and Exchange Commission has plans to examine Hindenburg’s claims as well as the company’s merger with SPAC DiamondPeak Holdings.

Hindenburg implicated Lordstown in March of using “fake” orders to levy capital for its electric truck. The short seller said the vehicle was nowhere near ready for production, but Lordstown has claimed it’s on track to begin production this fall.

“We felt it was untenable for the company to secure necessary new capital with a management team widely seen as potentially not leading the company into the next era of its development,” he said Monday in an investor note.

General Motors operated a plant in Lordstown, Ohio for over 50 years before stopping operations in 2019. But the plant was saved after GM opted to sell it to Lordstown Motors later that year. Lordstown Motors has been attempting to manufacture an all-electric commercial work truck, which it calls the Endurance pickup.

According to the Lordstown website: “Endurance pickups are made in America at our headquarters in Lordstown, Ohio. In addition to our experienced executive team made up of automotive leaders from Tesla, Toyota, GM, VW, Hyundai, and more, we will also leverage a skilled local labor force at this legendary manufacturing plant to build our electric trucks.”

The cyber truck revolution has been rough on Lordstown, whose stock was already down over 40% in 2021 prior to Monday’s news, since the company, which went public in 2020 through a merger with a special purpose acquisition company (SPAC), has been struggling to broaden production of the Endurance.

But the electric truck market has become increasingly competitive recently. A number of companies are entering the space, including Ford, who is launching an electric version of its uber-popular F-150, which it calls the Lightning, and electric vehicle pioneer, Tesla, which is in the process of creating a cutting-edge, electric pickup called the Cybertruck. GM has also entered the foray, with plans to release an electric Chevy Silverado.

This may be good news for stock and ETF investors looking to capitalize on the electric vehicle revolution.

Last year, consumers spent $150 billion USD on electric cars, more than double the previous year, while governmental support measures continued to fall for the fifth year in a row. This indicates a growing consumer demand for electric vehicles, one that does not rely on government subsidies for growth. “While they can’t do the job alone, electric vehicles have an indispensable role to play in reaching net-zero emissions worldwide,” said Fatih Birol, executive director of the IEA in a press release.

He went on to say that “current sales trends are very encouraging, but our shared climate and energy goals call for even faster market uptake.”

According to the KraneShares website, “55% of new car sales and 33% of the global car fleet are projected to be electric by 2040.” The global electric vehicle market is estimated to grow to $2.7 trillion by 2040.

KARS allocates 39% of its portfolio to consumer discretionary stocks, nearly 34% to information technology stocks, with another 11% in industrials, 8% in materials, and 6% in communication services.

KARS, which has net assets under management of $206 million, has seen $108 million in net inflows year-to-date.

Lordstown said its lead independent director, Angela Strand, has been appointed executive chairwoman and will manage the firm’s transition until a permanent CEO is announced. The company also named Becky Roof as interim CFO, effective immediately.

The company is scheduled to host media, investors, analysts, and others next week at its plant in Ohio. Strand said those plans are still in place.

“We remain committed to delivering on our production and commercialization objectives, holding ourselves to the highest standards of operation and performance and creating value for shareholders,” she said in a statement. “Along with the management team, I will continue to work closely with them and the Board to execute on Lordstown’s vision for the future of electrified transportation.”