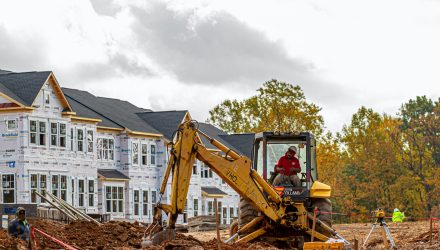 The housing market has been explosive over the last year, despite rising lumber prices, but recent data suggests that a peak may be in sight, which could be problematic for homebuilding ETFs.

On Wednesday, homebuilder confidence data, as measured by the NAHB/Wells Fargo Housing Market Index, plummeted to a 13-month low in July, coming in at a reading of 75, versus projections for the index to remain steady at 80.

‌”While the demographics and interest for homebuying remain solid, higher costs and material access issues have resulted in lower levels of homebuilding and even put a hold on some new home sales,” said NAHB chief economist Robert Dietz.

‌”While these supply-side limitations are holding back the market, our expectation is that production bottlenecks should ease over the coming months and the market should return to more normal conditions,” he added.

‌The massive rise in the price of lumber was a key factor in the spring. The cost of building a home is due to a number of factors outside of lumber, however.

As Dietz notes, supply-side limitations are still restraining housing, and it’s becoming more nebulous as to what may clear these impediments.

“While lumber prices are showing improvement, the price and availability of other building materials remain a challenge. These materials include flooring, drywall, appliances and windows, said the NAHB’s chief economist, Robert Dietz.

“While the demographics and interest for home buying remain solid, higher costs and material access issues have resulted in lower levels of home building and even put a hold on some new home sales,” Dietz added, noting that his expectation is that production bottlenecks should ease over the coming months and the market should return to more normal conditions.

Data on business inventories published Wednesday revealed that manufacturers continue to generate sales at a swifter pace than they can build their backlogs, meaning that demand is outstripping supply of materials for homebuilders.

This could be problematic for housing ETFs like the iShares DJ US Home ETF (ITB), which fell 0.22% Wednesday, and the SPDR S&P Homebuilders ETF (XHB), which lost 0.17%.

Earlier in the year, concerns of increased supply costs caused some analysts to predict a potential recession.

“The fact is if this continues, you will see the homebuilding sector slow down and grind to a halt,” said Jerry Howard, CEO of the National Association of Homebuilders, who said housing is often a leading indicator of economic health. “This problem with lumber and other building material costs is sort of setting another potential perfect storm for housing to lead us into a recession.”

A peak at second quarter GDP demonstrated a sharp decline in residential investment, with headline gross domestic product (GDP) growth failing to hit expectations. The latest data from S&P/Case-Shiller also revealed that home prices were climbing at a record pace as of May; the next update on this data series is due later this month.

While there are some concerns that the increase in costs could result in a longer-term issue for new homebuyers, a number of analysts see a more predictable normalization in the housing market, where prices begin to level out, and enthusiasm for new loan applications fades.

‌”[The] demand curve for single-family homes has moved back to where it stood before COVID, because the initial impulse to flee cities for the burbs has faded,” he wrote. “This process appears to have just about run its course, with mortgage applications steady in recent months, but the NAHB survey — along with the market and media narrative about the housing market — still needs to catch up.”

Over 56% of new and existing homes sold between the beginning of April and end of June were affordable to families earning the U.S. median income of $79,900. This is a marked decline from the 63.1% of homes sold in the first quarter of 2021 and the largest drop in affordability since the beginning of the NAHB’s revised series in the first quarter of 2012.

If analysts are right, this could mean that homebuilder ETFs like the Direxion Daily Homebuilders & Supplies Bull 3X Shares (NAIL) and the Hoya Capital Housing ETF (HOMZ) may have rocky waters ahead.