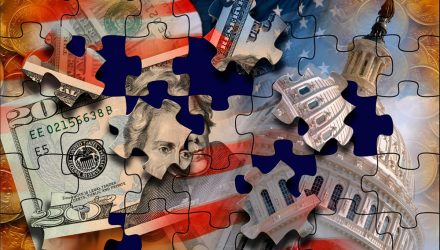 Assessing the risks of War: Investors have chosen to put a relatively low probability on a nuclear war with N. Korea.  Within markets, the focus has been on business fundamentals and the prospect of continued-growth-accompanied-by-low-inflation (a “goldilocks” outcome, “not too hot, not too cold…just right.”). We think this is a logical response to a now-known outcome – growth; versus an unknowable outcome – N. Korea. Many investors, ourselves included, believe neither the N. Koreans, the US nor the Chinese benefit from, or seek a military confrontation. That doesn’t mean it can’t happen, but we give it a low probability. The details of our view on the N. Korean situation can be found in our Weekly View: “Fire and Fury’ from August 14th.

What if we are wrong?  Should conflict occur, our risk management team will assess the situation and if necessary reduce portfolio risk, but our tactical work is not flashing warnings signs and so our portfolios have not changed much recently and continue to prefer stocks to bonds/cash. We also continue to prefer non-US stock markets. The rationale for overseas stock market outperformance is relatively straightforward. Investor caution was high regarding Europe (ahead of the French Election) and Emerging Markets (ahead of the Trump presidency). Macron’s victory in France produced investor relief and Euro strength against most global currencies, which has been coupled with accelerating economic and earnings data. Emerging Market economies have also been accelerating with the recovery in the global economy, and their stock markets usually outperform when the dollar is weak and commodity prices are rising. Both have been the case. The weakness in the dollar has been broad based and largely unpredicted, but a new down-trend in the dollar has been established which has greatly benefitted investors in overseas currencies: 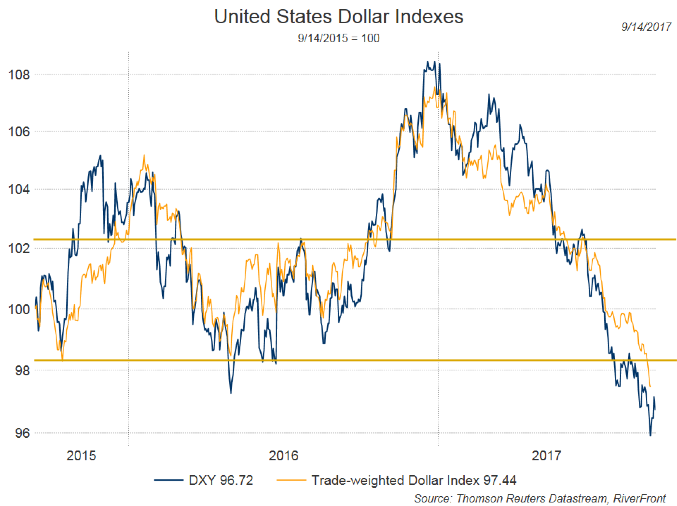 The chart above measures the dollar against other major currencies, dominated by those in Europe (the blue line) and against a broad basket of currencies weightings based on US trade (which gives a much bigger weight to the Canadian dollar and Mexican Peso). The message is the same: An apparent up-trend in 2016 which has reversed, breaking to a three-year low on both measures. The decisive break below the 102 level was a warning signal that the old uptrend was in danger and we think it would now take a break above that level to signal a technical reversal. We believe our portfolios are positioned to benefit from dollar weakness, given our overweight to non US markets both developed and emerging.