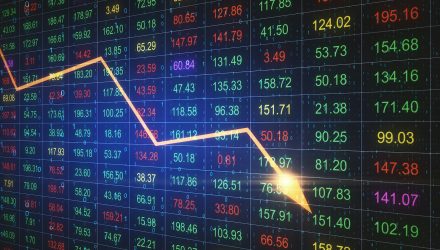 Stocks and index ETFs are getting crushed on Monday, amid fears that a national and global spike in coronavirus cases could stymie economic growth. While the selling has accelerated, particularly in the Dow Jones Industrial Average, which is currently headed for its largest drop of the year, some investors are seeing big gains despite the decline.

The Dow tumbled over 850 points Monday, or 2.47%, outpacing a 2% drop seen in late January. The S&P 500 lost almost 2% meanwhile, as the energy and industrial sectors led declines, while the Nasdaq Composite fell over 1.15%.

While consumer price pressures started the market’s decline on Friday, the fall has accelerated amid concerns that the delta variant of the coronavirus is starting to spread more rapidly among the unvaccinated.

Investors were overwhelmed in Europe as well, with bourses plummeting on the UK’s “Freedom Day,” as it was reported that the Prime Minister and the Chancellor were forced to isolate after being contact-traced to someone who was COVID-19 positive.

In Los Angeles, indoor masking requirements are back in place, with other regions pondering similar restrictions as a preventative measure.

“Concerns that the Delta mutation will slow or even reverse the recovery efforts appear to be sapping risk-taking appetites,” said Marc Chandler, chief market strategist at Bannockburn Global Forex.

The U.S. is averaging almost 30,000 new cases a day in the last seven days, a jump from a seven-day average of roughly 11,000 cases a day a month ago, according to CDC data.

While stocks have been taking a beating on Monday, as volatility is exploding, with the the Cboe Volatility Index leaping as high as 24.8, the decline has been a financial positive for contrarian stock players and inverse ETF investors.

SPXS offers 3x daily short leverage to the broad-based S&P 500 Index, making it a powerful tool for investors with a bearish short-term outlook for U.S. large cap stocks. Investors should note that the leverage on SPXS resets on a daily basis, which results in compounding of returns when held for multiple periods. BGZ can be a powerful tool for sophisticated investors, but should be avoided by those with a low risk tolerance or a buy-and-hold strategy.

The 10-year Treasury also yield dropped to a new five-month low of 1.19%, further heightening worries about the slowing economy, but pleasing bond buyers, as yields run inversely with prices.

“You have two concerns coming together this morning: concerns about market technicals and concerns about growth,” Mohamed El-Erian, chief economic adviser of Allianz and former CEO of PIMCO, said on CNBC’s “Squawk Box” Monday. “That’s what all the asset classes are telling you this morning.”

Last week, Federal Reserve Chair Powell implied it was premature for the central bank to take action by adjusting some judicious monetary policies designed to curtail inflation, given that the central bank would like to see further improvement in the labor market and other areas of the economy, and that inflation could be short-lived.

“The composition of recent data suggests that inflation will largely prove transitory as the Fed has stated,” said Ryan Detrick, LPL Financial’s chief market strategist, in a note to clients last week.

“Just how long ‘transitory’ will prove to be is the big question. We are in the middle of the season when we expected to see some hot prints, so this week has not necessarily been a surprise,” Detrick added. “But with each passing report market participants will be increasingly anxious to see those numbers start to moderate.”

Some analysts are more concerned that stocks could be transitioning to a more conservative period.

“The market appears ready to take on a more defensive character as we experience a meaningful deceleration in earnings and economic growth,” wrote Mike Wilson, Morgan Stanley’s chief U.S. equity strategist, in a note Monday. “Market breadth has been deteriorating for months and is just another confirmation of the mid-cycle transition, in our view. It usually ends with a material (10-20%) index level correction.” Wilson is advising clients to buy staples such as Mondelez International to weather the decline.

Bank stocks were under pressure on Monday due to declining yields, which means potentially less profit from lending. JPMorgan and Bank of America each lost about 2.5%, while the SPDR S&P Bank ETF (NYSEArca: KBE) and iShares U.S. Regional Banks ETF (IAT) were lower as well.

However, in addition to inverse ETFs, certain defensive stocks climbed amid the market sell-off, with the Dollar Store, Procter & Gamble, and a handful of utilities stocks showing gains.

Even with Monday’s steep drop, the S&P 500 is still just 3% under its record reached last week, and investors are awaiting better-than-expected earnings results this week.

“I hope what it does is that it motivates anyone who doesn’t get the vaccine to get the vaccine. I don’t think it’s going to change behavior to a great extent,” Ackman said in a interview on CNBC’s “Squawk Box.” “You are going to see a massive, my view, economic boom … We are going to have an extremely strong economy coming in the fall.”