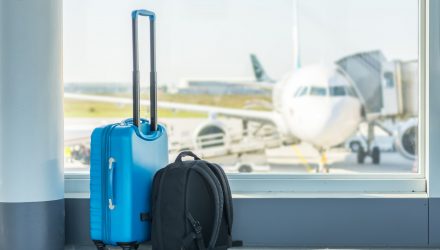 Which Stocks And ETFs Will Suffer Most From The Coronavirus Scare?

The deadly coronavirus, whose spread accelerated around the globe has now generated 2,862 confirmed cases so far in China, where the death count has climbed to 81, is trashing the stock market as investors run for safety. One question on investors’ minds now is which U.S. companies are especially vulnerable to the outbreak, given that their growth has been driven by Chinese consumers.

While travel and leisure related stocks are likely to be affected by the virus, Wall Street analysts are now issuing warnings about retailers, restaurants, and hotels that have high revenue exposure to China as some of their businesses are required to shut down, at least temporarily, after the death toll in China continues to climb, and infection spreads to other nations.

The coronavirus’ impact retailers like Estee Lauder and Nike, which plunged 4% and 6%, respectively on Monday over coronavirus fear, along with the broader indices, could be worse than the 2002-2003 outbreak of SARS, or severe acute respiratory syndrome, as many of them depend more on the Chinese consumers, according to Credit Suisse analyst Michael Binetti.

“China now a much bigger input to revs/EPS for global brands,” Binetti said. “The rate of retail sales growth in China slowed by about half during the peak of SARS.”

Citi said American hotel companies that have “significant” exposure to China such as Marriott, Hilton and Hyatt Hotels, whose stocks have tumbled more than 6% each in the past five sessions, could also be dramatically affected by the viral contagion.

Other analysts see the decline in hotel stocks as a potential buying opportunity, or at least not a reason to panic and sell.

“I wouldn’t sell them now if you own them because they are wonderful companies with wonderful business models. What I would say though is that if you don’t own enough of these great businesses, you probably want to wait a little bit to see if there is a travel restriction or warning issued by the WHO, and not long after that, the buying opportunity tends to be at its best. The company or the stock that has underperform most as a result of this, because of its exposure, has been Marriott,” said Harry Curtis, Nomura Instinet senior equity analyst covering gaming and lodging, on a call with CNBC.
“In the long run Hilton and Marriott are the two companies that you really want to own by virtue of the fact that they are the most defensive global business models in the travel and leisure space,” he explained.
For investors looking to purchase hotel stocks cheaper using ETFs, Vanguard Consumer Discretionary ETF (VCR) and the iShares S&P 500 Growth ETF (IVW) are two ETFs with healthy allocations of hotel stocks like Marriott and Hilton.
For more market trends, visit ETF Trends.