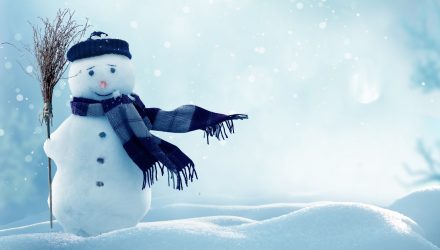 Like Frosty the Snowman, ETFMG Alternative Harvest ETF (NYSEArca: MJ) investors have to be feeling like jolly old souls with the latest news from two of its holdings, Tilray (Nasdaq GS: TLRY) and Canopy Growth (NYSE: CGC).

Tilray gained over 10 percent on Thursday after it announced a research partnership with Budweiser maker Anheuser-Busch (NYSE: BUD) on Wednesday. The joint venture will include a $50 million investment in the research of beverages infused with tetrahydrocannabinol (THC) and cannabidiol (CBD).

The deal comes just after Tilray announced a partnership with pharmaceutical giant Novartis AG to facilitate global supply and distribution for medical marijuana.

“For us, it’s early days in this industry and research feels like the right place to start,” said Tilray Chief Executive Brendan Kennedy. “At Tilray, we’ve been performing research and develop for almost five years on lots of different aspects of cannabis and cannabinoid delivery.”

MJ’s other holding, Canopy Growth, gained almost 6 percent after hours on Thursday after it announced that it will “participate in the American market” given the recent signing of the 2018 Farm Bill. The bill consists of a 5-year, $867 million funding towards farming initiatives.