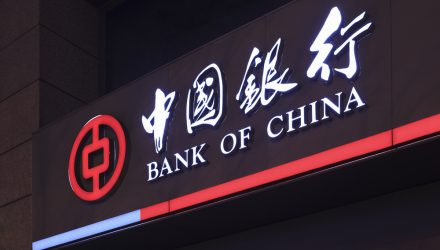 What Would Emerging Markets Be Without China?

In the first decade of the 2000s, the U.S. and other developed countries fell behind emerging market equities by a wide margin, and they lagged China’s markets in particular: the S&P China BMI grew by 600% in the first decade of the new millennium. The 2010s saw a reversal of fortunes for broad-based emerging market equities, with the U.S. leading developed markets to strong outperformance over the decade. 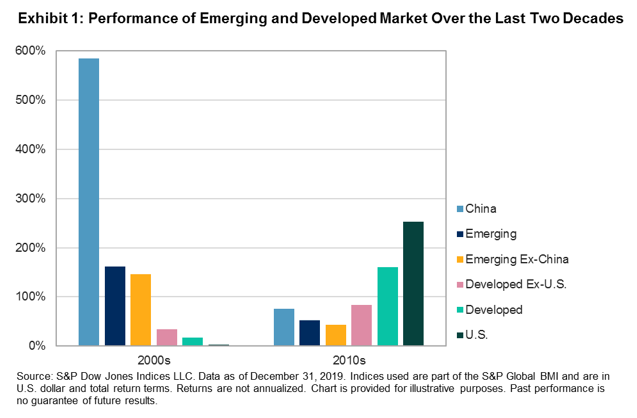 The first quarter of 2020 was marked with record levels of volatility in response to the COVID-19 pandemic, followed by a sharp recovery in the U.S. as the S&P 500® experienced both its shortest bear market and its fastest return to new highs.

But while the S&P 500 is now up a healthy 6% YTD, the S&P Emerging BMI is essentially flat, with a total return in U.S. dollars of -0.06% (as of Sept. 14, 2020). The index’s performance masks a wide dispersion of returns among its constituents: a 53% spread separates the top performer, China, from bottom-of-the-pack Colombia. Few markets have begun the decade with gains: in fact, only China and Taiwan are in the green for 2020. 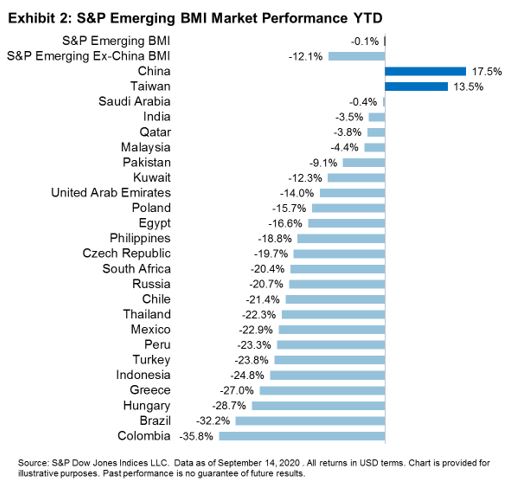 Thanks in part to such strong recent performance, China has now become as important to the emerging markets as the U.S. is to developed markets, if not even more. China has come to represent nearly 50% of the S&P Emerging BMI by weight—with China’s weight helped by the broader A-shares universe, which was included in the benchmark in 2019 at a partial inclusion factor of 25%. 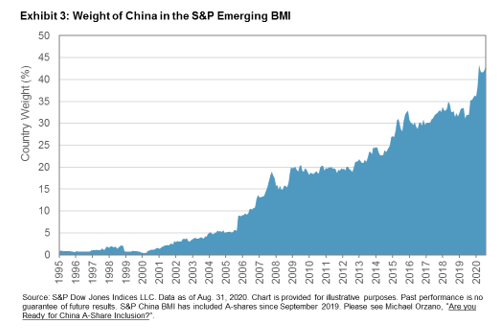 While China’s role in emerging markets may mimic U.S. dominance of the developed markets, from a sectoral perspective there are both similarities and differences. The U.S.’s sizeable ~27% weighting to the IT sector is its largest, while China’s biggest sectors are Consumer Discretionary and Communication Services—which together account for more than 50% (see Exhibit 4). 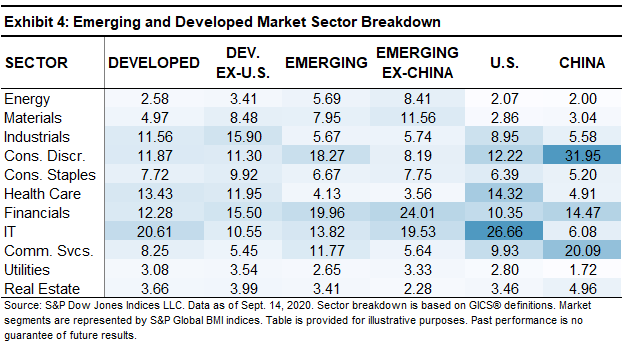 However, the differences in sector weights disguise a further commonality: dominating China’s largest sectors, Alibaba and Tencent are, respectively, broadly comparable in both relative size and business activities to Amazon and Alphabet (parent company of Google). These mega-cap tech-related firms have seen large outperformance in comparison to other sectors and the rest of the world, putting them in the driver’s seat of their respective local markets and striking a common chord between the U.S. and Chinese markets.

The path for China in 2020 and beyond remains uncertain. But what is clear is that a view on emerging markets requires careful consideration of the allocation made to—and the prospects for—Chinese stocks. You can learn more about S&P DJI’s range of global equity benchmarks here.