You are at:Home»Currency-Hedged»What New Brexit Deal Means for U.K. ETFs 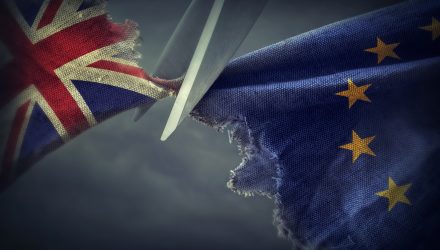 The iShares MSCI United Kingdom ETF (NYSEArca: EWU), the largest U.K. ETF trading in the U.S., is saddled with a year-to-date loss of about 4% as U.K. stocks trail other major developed markets. Some market observers believe Brexit is still an issue for U.K. equities.

“The UK stock market has had a poor start to 2018. It has under-performed global markets for much of this decade, with the gap widening after the June 2016 Brexit vote,” said BlackRock in a note out Monday. “The new transition deal between the UK and European Union removes some uncertainty around Brexit but provides no relief for UK stocks, in our view.”

The pound tumbled in the wake of the 2016 Brexit vote, but has recently regained some strength, crimping U.K. exporters in the process.

“The British pound has regained some strength over the past year, weighing on the international earnings of UK-listed companies,” said BlackRock. “The composition of the UK market is another reason for its recent lagging. UK large cap indexes have a relatively high weighting to sectors that have underperformed in the past year, such as consumer staples and energy. And UK’s tiny technology sector has also hampered performance relative to major or global indexes offering hefty tech exposures.”

EWU allocates 22.5% of its weight to financial services stocks, a group deemed “Brexit sensitive.” Additionally, the ETF devotes 32% of its combined weight to export-driven consumer staples and energy stocks.