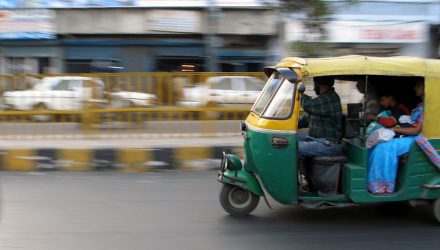 VWO is also one of the least expensive emerging markets ETFs. The fund owes its popularity, in part, to an annual fee of just 0.14%. That is the equivalent of $14 on a $10,000 investment, making VWO cheaper than 90% of competing strategies, according to Vanguard data.

“The U.S. currency’s longest losing streak in more than six years helped whip up demand for emerging-market assets last week,” reports Dani Burger for Bloomberg. “Investors added $978 million to the Vanguard FTSE emerging markets exchange traded fund over the past five days, the most in nearly five years, according to data compiled by Bloomberg.”

That continues a torrid pace of asset gathering this year for VWO. Year-to-date, investors have added $7.54 billion in new assets to VWO, a total surpassed by just eight other ETFs. In the third quarter, only four ETFs have added more new assets than VWO.

“Emerging market equities typically struggle in the face of a rapidly rising dollar and so conversely have benefited as this year’s consensus view for U.S. dollar weakens, along with evaporating expectations of a rise in U.S. interest rates,” Andrew Lapthorne, head of quantitative strategy at Societe Generale SA, wrote in a note to clients Monday, reports Bloomberg.