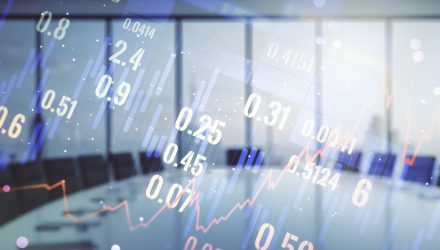 Wary Globe-Trotting Investors Are Looking Back to Domestic U.S. ETFs

Investors initially began the year looking for global deals after a record-setting rally and a new interest rate outlook caused many to reassess their expensive stock holdings. However, with the Russia-Ukraine crisis fueling risk in European markets, some may be shifting back to U.S. stock exchange traded funds.

The U.S. dollar has been outperforming the Group of 10 peers over the past month, while the S&P 500 is set for its first weekly outperformance over global peers this year after suffering its worst start since 2009.

“We have an underweight position to continental European equities as we have less confidence in the pace of the economic recovery in the region,” Edward Park, chief investment officer at Brooks Macdonald Asset Management, told Bloomberg. “We certainly have a preference for the U.S. over Europe.”

The USD is benefiting from both the risk-off sentiment that pushed investors toward safe assets and the prospect of higher U.S. borrowing costs as the Federal Reserve takes on a more hawkish stance. The latest Fed policy minutes revealed that officials will begin raising rates soon and were watching to see whether persistent inflation would justify faster hikes.

Colin Graham, head of multi-asset strategies at Robeco Institutional Asset Management, attributed the increased geopolitical risk in eastern Europe as his reason to go long on the dollar versus the euro pair at the start of the month.

“The traditional dollar safe haven trade is still there,” Graham told Bloomberg. “The political risk plus the interest-rate moves in the U.S. should benefit the dollar more than the euro.”

ETF investors are also showing greater favor for U.S. markets. In February, $48 billion has flowed into ETFs tracking U.S. markets, or almost 10x the inflows compared to offerings in Europe. The sudden influx in new money is a big reversal compared to January when European funds brought in $26 billion but U.S. funds saw only $20 billion.