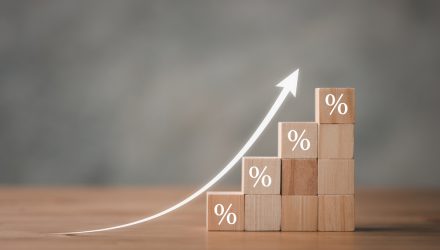 Among the best performing non-leveraged ETFs of Friday, the iPath Series B S&P 500 VIX Short Term Futures ETN (VXX) increased 4.5% and the ProShares VIX Short-Term Futures ETF (VIXY) gained 9.4%. Meanwhile, the CBOE Volatility Index surged 16.9% to 25.5, breaking above both its short- and long-term resistance at the 50- and 200-day simple moving averages, respectively.

Triggering the spike in volatility, Federal Reserve Chair Jerome Powell warned that the central bank will continue to hike interest rates and hold rates at an elevated level until inflation is properly clamped down, even if this means putting more strain on the economy and households.

While the central bank’s steps to slow the rate of investment, spending, and hiring “will bring down inflation, they will also bring some pain to households and businesses,” Powell said in a speech at the Kansas City Fed’s annual symposium in Jackson Hole, Wyoming, according to the Wall Street Journal. “Those are the unfortunate costs of reducing inflation. But a failure to restore price stability would mean far greater pain.”

“Reducing inflation is likely to require a sustained period of below-trend growth,” Powell said in his speech.

In the upcoming September 20 to 21 meeting, officials are expected to weigh another half-point or 0.75-point interest rate hike.

The markets previously hoped that the Fed will begin holding back on more aggressive interest rate hikes and even pivot toward a looser stance in 2023, but Powell’s latest announcement dashed these hopes.

“The message that Powell was really trying to convey was that we see the Fed funds futures market expecting rate cuts in 2023 and we don’t like it,” Luke Tilley, chief economist at Wilmington Trust, told MarketWatch, adding that Powell’s remarks were “very hawkish.”

Consequently, the greater uncertainty has rattled the otherwise complacent market.

“Because we’re uncertain, we’re desperate for some kind of signal from the Fed,” David Bianco, Americas chief investment officer at DWS, told CNN. “But they don’t have clarity themselves on it.”