You are at:Home»Featured»Volatility ETFs Jump as Fears of a Recession Sink In 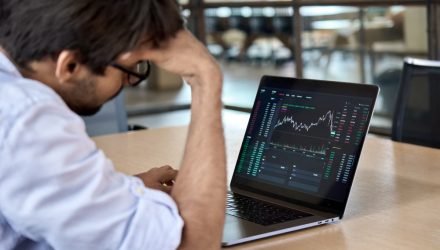 Volatility ETFs Jump as Fears of a Recession Sink In

The CBOE Volatility Index and VIX-related exchange traded funds spiked Thursday as the markets cogitated over the ramifications of the Federal Reserve’s latest rate hike and the potential for an economic recession.

“I think the markets are reassessing the market environment,” Michael Sheldon, chief investment officer at investment advisory firm RDM Financial Group, told the Wall Street Journal. “The outlook for growth and profits and inflation, at least over the next few months, is not all that favorable, unfortunately.”

The S&P 500 suffered its sixth decline in seven sessions after the Federal Reserve on Wednesday implemented its largest interest rate hike since 1994.

“I think this is the realization that we really could be heading for a recession. I am not sure that had really filtered through to the mind of the market until now,” Altaf Kassam, head of investment strategy for Europe, the Middle East, and Africa at State Street Global Advisors, told the WSJ.

While the U.S. equity markets rallied initially following the Fed’s actions on Wednesday, other global central banks’ interest rank hikes, including those from Switzerland and the United Kingdom, fueled fears that the attempts to curb inflation could trigger a sharp slowdown in global growth or a recession, Reuters reported.

“It’s just getting beaten down. This is a belief that the Fed is going to force a recession and they are just going to beat this market down until even high net worth investors cry uncle,” Jack Ablin, chief investment officer at Cresset Capital Management, told Reuters.

“It’s also the put too,” Ablin said, referring to the Fed intervention during the Great Financial Crisis to rescue risk takers. “It was in the interest of keeping the banking system together, but it started a relationship between risk takers and central banks and inflation is driving a wedge between them.”