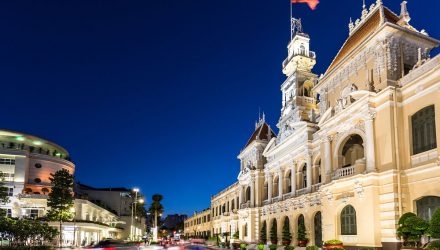 Historically, emerging markets stocks and ETFs are among the most volatile in the world, but that volatility is decreasing in a big way for investors.

At least that is the case for the Vanguard FTSE Emerging Markets ETF (NYSEArca: VWO), the largest ETF tracking developing world equities.

ETF investors also threw money into overseas markets where valuations appear cheaper relative to the loftier prices in the U.S. – U.S. markets are trading at forward price-to-earnings of around 18 times, compared to historical averages of 15 times. Year-to-date, VWO has seen inflows of $8 billion, ranking it among this year’s top 10 asset-gathering ETFs.

“Expected price swings in the Vanguard FTSE Emerging Markets exchange-traded fund, the biggest of its kind with about $62 billion in assets, have fallen to an unprecedented 10.1 percent compared with a five-year average of 18.6 percent. That follows a 26 percent gain for the ETF this year as investors poured $8 billion into the fund,” reports Sid Verma for Bloomberg.

VWO is one of the least expensive emerging markets ETF with an annual fee of 0.14%, or $14 on a $10,000 investment, making it less expensive than 90% of competing funds, according to Vanguard data.