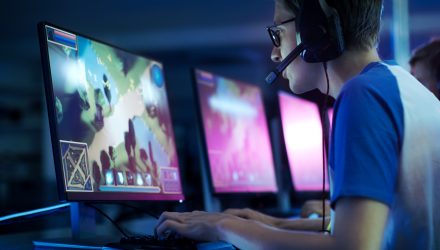 GAMR follows the EEFund Video Game Tech Index, which tracks the performance of companies across the video gaming space. The ETF contains holdings from across the globe but with a focus on companies in the United States and in Asian countries; this includes 35% in the U.S., 31% in Japan, 9% in Korea, and 7% in China.

Related: A Look at the First ETF Dedicated to Video Game Industry

Asian countries are playing a strong role in the development of the industry.  For example, “in 2015, China made the decision to end its ban on video game consoles and hasn’t looked back since. In 2014, game revenues in China stood at $18 billion, second only to US revenues coming in at $21.3 billion. By 2018, however, Chinese revenues are expected to almost double to $32.8 billion, compared to $24.0 billion in the US. Furthermore, a burgeoning eSports market is thriving. Year-over-year revenue growth in 2017 is expected to be 41.3% and rise to $696 million. By 2020, this figure is anticipated to rise to approximately $1.5 billion,” says Seeking Alpha.